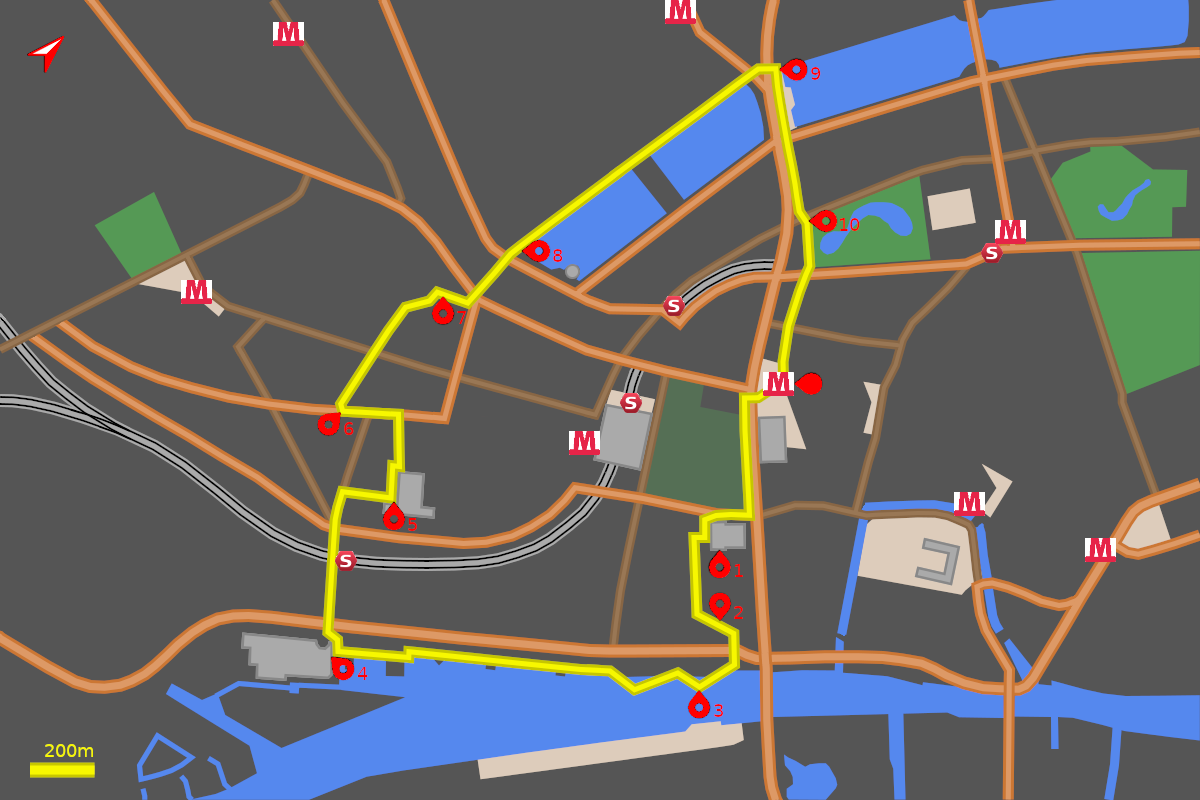 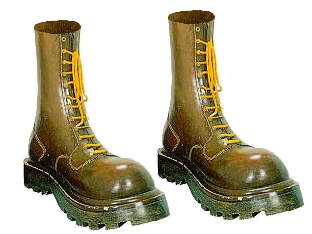 The west end of the City (really the south-west end) contains a wide variety of places and spaces to explore, from the Town Hall to the Meat Packing District, from the harbour front to the Lakes. What potentially looks a less than inspiring tour from a quick glance at the map, in fact is quite diverse, and once the tourist heavy areas of the Town Hall Square and Tivoli are left behind it probably gives a better sense of where the locals like to hang out.

Vestervoldgade marks the western limit of the old City walls. This walk is entirely outside these walls. Historically the area south of Vesterbrogade was under water until the mid-nineteenth century, with the present harbour- front not established until the end of the nineteenth century.

This walking tour will take in the best of "West Copenhagen",

Note: The map (above) and photographs can be enlarged by clicking on them (opens in a new browser tab). On the map north is 30° clockwise, i.e. at 01:00 on an old school analogue clock.

Coming out of the Metro station one is immediately confronted by the drama of the town hall square Rådhuspladsen. Dominating the south-east side is the immense town hall itself, reminiscent of the town hall in Sienna. It was completed in 1905 and is the masterwork of the National Romantic style. The details in the design are too numerous to mention here.

Going anti-clockwise around the square the next object of note is the monument to the lur blowers (Lurblæserne). Two buglers stand atop the brick column blowing their lurs, which are an ancient bronze musical instrument.

The next building of note is the fabulous Art Nouveau style Palace Hotel, with its tower continuing the Tuscan inspired theme of the square.

Completing the triumvirate of Tuscan towers in the town hall square is the brick and copper-topped tower of the old Bristol Hotel.

When you have finished admiring the town hall square, head for the large crossing to the right of the town hall, the one closest to the town hall (GPS 55.67563 12.56818). On the far side turn left and walk along the multi-lane H. C. Andersens Blvd.

After the modern glass-fronted building comes the fine looking brick building called H.C. Andersen Slottet, with a large sign shouting out the name of Tivoli, directly across from the town hall. This is advertising the Tivoli amusement park, which occupies this one block in the centre of a European capital city, and is one of the oldest in the world. The amusements include The Roller Coaster (Rutschebanen), which is also one of the oldest, still surviving, wooden coasters in the world. The main entrance to the park is around the corner on Vesterbrogade and there is an entrance fee.

Continue down H. C. Andersens Blvd. along the Tivoli parks fencing, peering in if you wish to see what you are missing. At the next junction the domed building of the New Carlsberg Glypotek comes into view.

1 At this junction with Tietensgade cross at the pedestrian crossing to reach the corner of the Glyptotek and turn right down Tietensgade (GPS 55.67338 12.57198).

The Glyptotek contains the art collection of Carl Jacobsen, the son of the founder of the Carlsberg Breweries. The galleries contain items starting from 8000 years ago, via some incredible Egyptian figures, Greek and Roman sculptures, to an exceptional collection of French Impressionist and post-Impressionist art.

Where Tietensgade bends slightly right, opposite the Demon roller coaster ride, go through a small gate into the rear garden of the Glyptotek. Round to the left the garden opens out into a sculpture park (GPS 55.67246 12.57078).

When you are satiated with the art exit the gardens by the gate opposite the pyramidal roof, onto Ved Glyptoteket (GPS 55.67193 12.57100). Turn left and cross Neils Brocks Gade to continue down Otto Mønsteds Gade.

2 This brings you to an triangle with Otto Mønsteds Plads and Hambrosgade (GPS 55.67059 12.57365). Looking around reveals a mish-mash of architectural aged, styles and materials. Perhaps the most striking is the angular Crystal building.

Cross Hambrosgade and go around the back of the angular glass Crystal building, noting how it gives the impression of being precariously balanced. A two-lane road (Kalvebod Brygge) is crossed at some traffic lights (GPS 55.67053 12.57616), to a small brick and red-roofed building called the Kongeligt Toldkammer (Royal Customs House).

Pass round the back of this Customs House to reach the harbourside. A wooden platform marks the start of the Kalvebod Bølge - The Kalvebod Wave (GPS 55.67016 12.57675), The Wave is a recreational area for water sports, bathing or just sun-bathing. It consists of different levels connected by wooden walkways. On a sunny summers day it is jampacked with people.

3 Walk out along the platform to the crest of the first wave (GPS 55.66913 12.57623), which is directly opposite the Islands Brygge water park, another popular summer spot. The view down the harbour, to the south-west is impressive, giving an indication of how the harbourside has developed as both a business and accomodation hotspot.

Pass the bathing area and then take the next platform out to the crest of the second wave (GPS 55.66781 12.57406). The upper platform has an exercise station if you have energy to spare.

Back on the harbourside (GPS 55.66743 12.57224), the walkway continues south-westerly, next to the water, around some buildings and through some others. After about 600m the route bends round a yellow- brick building, where a sharp-cut glass building can be seen jutting out into the harbour. Go through the first building, past a boat hire station and through a hotel to emerge opposite the Fisketorvet shopping centre (GPS 55.66298 12.56289), Immediately above you is the acclaimed "Cycle Snake" bridge (Cykelslangen). This is for cyclists only so you will have to admire it from below.

4 Fisketorvet is a typical shopping mall, with high-street shops, restaurants and a multiplex cinema. Turn right along its flank, cross a road and take the stairs in the corner of a bridge up to the higher level road, where the Cycle Snake emerges (GPS 55.66324 12.56207). To the left is the main entrance to the Fisketorvet shopping centre. We are heading the opposite direction.

Cross the cycle lane at the top of the stairs and turn right. After 50m the pedestrian pavement crosses back over the cycle track again to continue on the right side of the bridge. Continue under a higher level bridge that is part of a walkway that joins all the buildings on this side of the main road.

On the left are the spiky high-rises of the Cactus Towers. The bridge now crosses the numerous railway tracks that lead to Copenhagen Central Station to the north-east. The tracks on the west side lead to all the major inter-city destinations. The last section of this bridge gives access to Dybbølsbro station which is part of the S-train commuter network.

5 You are now entering Kødbyen, the meatpacking district. This used to be the main Copenhagen meat market and names and building decorations memorialize this. Now it is a meet market with all sorts of bars and restaurants to tempt you.

The road turns to the left (GPS 55.66696 12.55927), and after 100m you enter the main "square". Our route carries straight on down Høkkerboderne, but if you are feeling hungry or thirsty then where better could you find yourself.

6 Turn right into Skydebanegade and head up the street admiring the drama of the housing sheme. The number of apartments facing the street is increased by having deep and narrow open courtyards set back from the main street. It all looks very symmetrical but is in fact anything but because the plot is built at an angle to Sønder Blvd. and Istedgade. Look carefully and you will see that the courtyards on the west side get progressively shallower as you head north. The overall feel of the street with is very communal.

The peaceful atmosphere of Skydebanegade ends when you emerge onto Istedgade. Istedgade is a kilometer long straight road from the Central Station to Enghave Place, which was rooted in working class culture and a centre for the sex and drug trade. Today it has moved on, but is still known for its round-the-clock culture.

The neo-gothic shooting range wall was constructed to shield traffic on Istedgade from stray bullets. Through the gateway you find yourself in the Shooting Range Gardens and playground where stray children are the main hazard. Head north through the park and veer to the right to find an exit onto Absalonsgade. Ten meters north is a turning on the right onto Svendsgade (GPS 55.67161 12.55410).

The elegant headquarters of the Royal Copenhagen Shooting Society, built in 1787, can be seen further up Absalonsgade, to accomodate their active social life.

7 Turn right along Svendsgade and soon you will find yourself in Vesterbro Square in front of the grey twin-towered Elijah's Church. At the far side of the square cross the busy Vesterbrogade at the traffic lights (GPS 55.67236 12.55564), heading for the narrow street that appears blocked by a classical looking building straddling the street.

This building is the New Theatre whose staple is world renowned musicals. Three arches, two pedestrian and a larger central one for traffic tunnel through the building. The theatre entrances are in the tunnels and the auditorium is on the floor above.

8 The three lakes, running in a line north-west from here, were used both as defensive fortifications and reservoirs for the city. Today they are very popular destinations for recreation with walkers and runners using the gravel tracks along their banks.

Looking west along the end of the lake, the circular building of the Planetarium projects into the water. But our route heads north along the western side of Sankt Jørgens Lake.

9 Take the crossing over Rosenørns Allé and then the next crossing over the dual carriageway of Åboulevard to reach an open space of gravel and bushes at the southern end of Peblinge Lake. The views here are expansive (GPS 55.68237 12.55841),

Pass in front of the church and make a 200m dash along the busy Gyldenløvesgade, crossing Nansensgade, to another major crossroads where Nørre Farimagsgade joins (GPS 55.67990 12.56379), This junction was the location of the start line for the 2022 Tour de France, which began with a time trial around the city. (There is a cycle tour describing the route elsewhere on this website).

10 Across Nørre Farimagsgade is the gated entrance to the relative peace of Ørsted Park. Go through this gate and turn right. Soon a lake appears on the left. The lake used to be part of the city defences, the curved shape tracing the outline of what was Hahns Bastion. We are using the park as a pleasant diversion to avoid the main road. Of course if you want to explore it then there are many things to discover.

After passing the park a gate appears on the right. Take this to leave the park onto Nørre Voldgade. Cross this wide road at the crossing (GPS 55.67910 12.56615), An island, to the right, contains the remains of Jarmers Tower which was also part of the city defences.

On the far side of Nørre Voldgade turn right, then follow the curve round to the left as it turns into Vester Voldgade. Cross the narrow Sankt Peders Stræde and the slightly wider Studiestræde (GPS 55.67775 12.56705), to soon emerge into Rådhuspladsen, and the Metro station where the tour began (GPS 55.67634 12.56886).

Hans Christian Ørsted is perhaps the second best known Danish scientist after Neils Bohr. He lived between 1777 and 1851 and was the first to discover the direct relationship between electricity and magnetism (a wire carrying an electic current will deflect a magnet needle). This led to the unifying of the electromagnetic laws described by Maxwell, which in their turn led to Einstein's theory of Relativity.