The old codger has a holiday

The Old Codger has not been on holiday for sixty-odd years. When he was a boy his parents took him to Blackpool on a charabanc trip, but he moaned so much during that week that they vowed never to take him again. He moaned when they tried to feed him treats like rock, jellied eels or whelks because he just wanted his favourite bread and dripping. He moaned when they tried to entertain him with the Punch and Judy show or the rides at the fairground because he just wanted his play stick. He moaned when they tried building him sandcastles because all he wanted was the pile of dirt he played with at home. They tried to get him to swim in the sea with a rubber ring but in the middle of moaning a big wave caught him unawares and he swallowed so much sea water that it swilled round his stomach for days. Eventually his parents despaired and took him home but he did not stop moaning about it for years.

One day on the allotment the Old Codger found a tatty piece of newspaper wrapped around one of his leeks. He was about to throw it onto Mr. Jones’s leeks when something caught his eye. In big writing which, his old eyes could just read with a bit of squinting, it said “Special offer, coach trip to Blackpool”. “Blackpool”, he thought, “I haven’t been there since I was a boy. What a wonderful time I had. I think I will go again”. 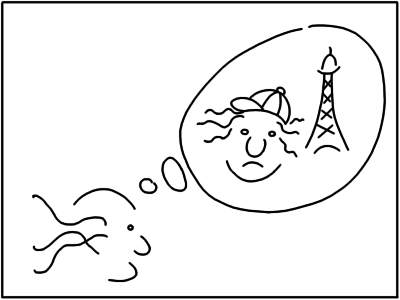 So he went back to the shed he calls his home, found an old battered suitcase under his bed and went round all his carefully arranged piles of useless rubbish looking for things that would come in useful on a holiday. An old car tyre inner tube would do as a rubber ring. His garden trowel and a flowerpot would do as a bucket and spade. In his clothes box he found a large handkerchief that could be tied to hide his bald head from the sun, a pair of worn corduroy trousers which he cut  the legs off to make a pair of shorts and a shirt so patched up that it looked like a quilted bed spread. And from his treasure trove of lost property, collected over the years, he found a pair of ancient sunglasses bent and cracked which barely stayed on if he kept his head still.