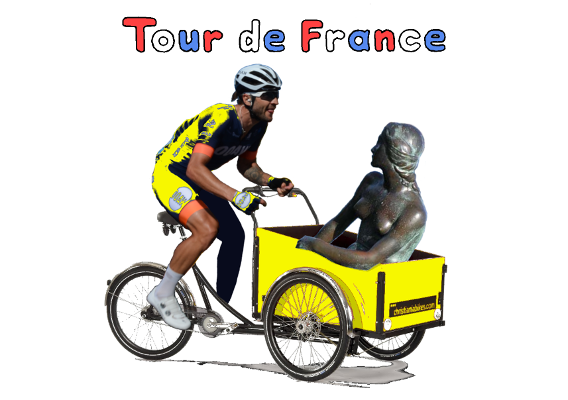 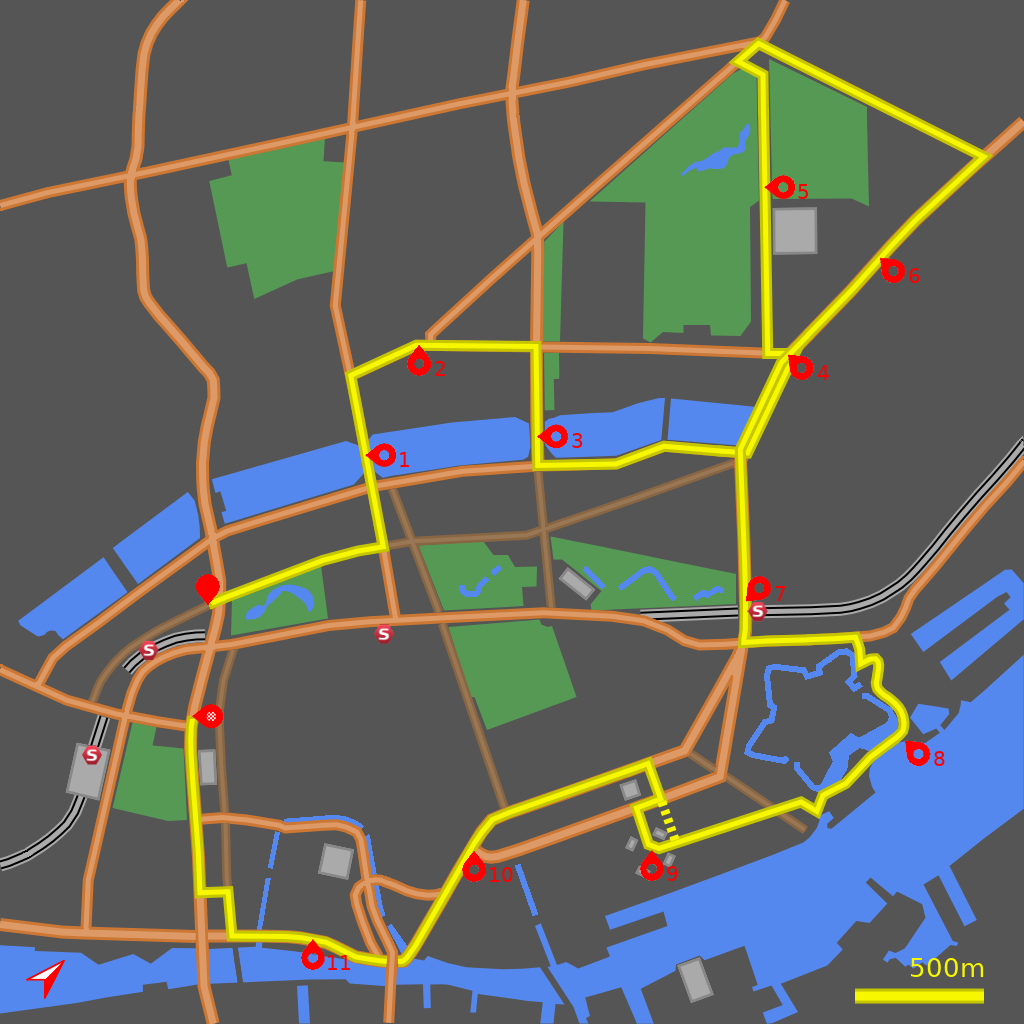 On Friday 1st July 2022 the opening time trial stage of the Tour de France took place on the streets of Copenhagen. The route, a circuit of the inner city, is as flat as a flat thing can be, but I imagine the Danish organisers did not reveal that in Denmark every direction you cycle is into a head wind. As it turned out the main problem was the rain and not the wind. Of course the Tour de France riders also had the advantage of the green wave where all the traffic lights change to green so they do not have to stop at a red.

The following tour follows as closely as possible the official route of this first stage of the Tour de France 2022. However there are two sections with slight diversions so as not to break the law, one a pedestrian area and the other a one-way street.

Start at the junction of H. C. Andersens Boulevard and Nørre Farimagsgade. (GPS 55.67970 12.56359). From the Central Station or from Vesterport station this can be reached by following Vester Farimagsgade northwards.

Head north on Nørre Farimagsgade with Ørstedsparken on the right. Wind those legs up along this straight stretch. Cross two junctions then turn left onto Frederiksborgade (GPS 55.68497 12.56827). Among the shops along here are popular outdoor outfitters. The view suddenly opens out where the route crosses the Lakes by Dronning Louises bridge.

2 The route bends slightly right then there is another straight stretch along Blegdamsvej. At the next major junction turn right onto Fredensgade (GPS 55.69366 12.56636).

3 A quick sprint brings you to the Lakes again - cross them by Fredens bridge - and appreciate the extensive views in the middle of a capital city. At the major junction on the far side use the cycle crossings to turn left onto Øster Søgade (GPS 55.69082 12.57150).

The next stretch along the side of the lake is very pleasant. Many different types of bird will be there to cheer you on. At the next junction with Østerbrogade (GPS 55.69614 12.58000). the Tour de France riders get the first of their major advantages. For the next 300m or so the route runs out and in along the same stretch of road. The Tour riders will use the western lane riding north and the eastern lane riding south. But that is against the normal flow of traffic, so we will have to cross the road twice. So cross over to the far side and head north on Østerbrogade to the big open junction of The Triangle.

4 The copper roofed oval building (B.T.) in the middle of The Triangle used to be a waiting room for the major tram terminal here. The route turns left so use the crossing beyond the waiting room, at the junction of Østerbrogade and Nordre Frihavnsgade (GPS 55.69970 12.57766). After the left turn take the first right onto Øster Allé (GPS 55.69922 12.57653).

Now comes a long straight stretch (just over 1km). If the head wind is strong this may feel brutal, but otherwise you may wish to raise your head to take in the "model village" of Brumleby, built as social housing to improve living conditions following the 1853 Copenhagen cholera outbreak. Further on is the Parken Stadium which hosted some of the football matches of the UEFA Euro 2020 competition in 2021.

5 And then comes the open space of Fælledparken which is the city "commons". On Labour Day (1 May) a large gathering takes place with unions and politicians vying for attention amongst the music and beer.

6 Another long straight (over 1km) brings us back to The Triangle. Half way down Østerbrogade take note of the neo-classical (1926) facade to the Østerbro Stadium and the adjacent swimming baths (from 1930).

The route into town is ahead along the wide Dag Hammarskjölds Allé. Some of the big embassies occupy the area around Garrison Cemetry (Garnisons Kirkegård) on the left. I guess it makes it easier for them to spy on each other.

7 The route passes the park of Østre Anlæg on the right, and passes over the railway at Østreport station. The station building is the original from 1897. At the junction with Folke Bernadottes Allé (GPS 55.69151 12.58819). the route turns left.

On the right is the tree-lined boundary of The Citadel (Kastellet). Take the first junction on the right, (Ved Norgesporten) (GPS 55.69443 12.59296), and then immediately after follow the road round to the left (Langelinie) (GPS 55.69402 12.59420). It will come as a surprise to find that the route is going uphill, but it is not for long. The road bends to the right and left, losing height again with a marina on the left.

8 What happens now is that the Tour de France route follows a pedestrian walkway making it impossible to follow on a bicycle. The reason this is done is so that the riders can pass the iconic statue of The Little Mermaid (Den Lille Havfrue). Opposite the marina is a small roundabout (GPS 55.69333 12.59888). The official Tour route jumps onto the pavement on the left and makes a hairpin turn to pass along the harbourside walkway. Unless you want to push your bike you will have to go round the roundabout and continue along the road southwards.

Pass under the Langelinie pavilion and under a pedestrian bridge to a cobbled area by the harbour. The official tour route goes over that bridge and down past the Gefion fountain. We rejoin the official route by going through the gates on the right (GPS 55.68903 12.59839), onto Chrurchillparken to the foot of the Gefion fountain (GPS 55.68893 12.59733), Bear left to continue along Churchillparken to the junction with Esplanaden. Ahead, down Amaliegade, can be seen the statue of Frederik V astride his horse. Take aim and head straight for him.

9 The statue lies on a very important axis at the centre of Amalienborg Palace. Through the portal on the left can be seen the Opera, and to the right Frederik's Church, otherwise known as the Marble Church (Marmorkirken). Unfortunately the square is a pedestrianised area, so you will have to dismount and scamper across the square on foot. Take the portal on the right towards the Marble Church.

At the junction of Frederiksgade with Bredgade the official Tour de France route turns left, mais nous avons un problème! Bredgade is a one-way street heading the wrong way; even cyclists do not have a cycle lane going the way we need. We will have to use Store Kongensgade, which is the one-way street going the right way. But we cannot go round the Marble Church to get to it as the new Metro station blocks the way. So we will have to go around the block. So turn right onto Bredgade, take the first left onto Fredericiagade, and then first left again onto Store Kongensgade.

Alternatively if you wish to avoid Amalienborg Square with its pedestrianisation, cobbles and soldiers, turn right onto Fredericiagade just before entering the square (at the security bollards) (GPS 55.68490 12.59394), cross Bredgade and turn left onto Store Kongensgade, as above (GPS 55.68613 12.58928),

10 Contiue along Store Kongensgade until it opens out into Kongens Nytorv (GPS 55.68143 12.58530), Across the square by Nyhavn is the French Embassy in Copenhagen, bon courage! Curve round to the left following the main road to the far side of the square between Magasin du Nord and the Royal Theatre (Det Kongelige Teater), (GPS 55.67958 12.58545). This is where we rejoin the official Tour route - hopefully they have been delayed sufficiently by a red wave.

Continue south down Holmens Kanal to the large junction with Holbergsgade, (GPS 55.67763 12.58633). The route continues straight across the junction, so fight the desire to curve round to the right, and use the bicycle filter lane to cross the junction in two stages in front of the statue of Niels Juel. Continue down Niels Juel Gade to where it opens up dramatically at the harbour. Take the road ahead over the canal with the old Stock Exchange on the right, and Christiansborg behind. The route curves round to the right under the road bridge of Knippelsbro, (GPS 55.67505 12.58680).

11 The raod now passes between the wings of the Royal Library (Det Kongelige Bibliotek), across another canal and through the Danish Architecture Centre. Immediately after DAC where the new cycle bridge comes in from the left turn right onto Vester Voldgade. (GPS 55.67169 12.57867). Take the second road on the left (Rysensteensgade) (GPS 55.67265 12.57655), which is where the photos from the race day were taken. A final right turn onto H. C. Andersens Boulevard, (GPS 55.67210 12.57568) leads to the home straight.

The finish line is ahead so put your head down and go like the wind. Ignore the attractions of the Tivoli amusement park on the left, and scream past the Town Hall on the right to finish just past the junction with Vesterbrogade on the left. (GPS 55.67616 12.56737). Take the applause of the watching crowds. Perhaps no one noticed, in which case you may want to know what it feels like to have an unexpected win, so search for the hilarious Tour de France spoof video by Remi Gaillard.

If your Tour bus is not waiting for you, you can return to the Central Station along Vesterbrogade.

Notes on the Tour de France:

Every other year or so the Tour de France has a Grand Depart in a country outside of France. The 109th edition of the Tour de France will visit Denmark for the first time. The first stage is not always a time trial; sometimes the organisers wish to give the non-climbers a head start if the course becomes especially mountainous.