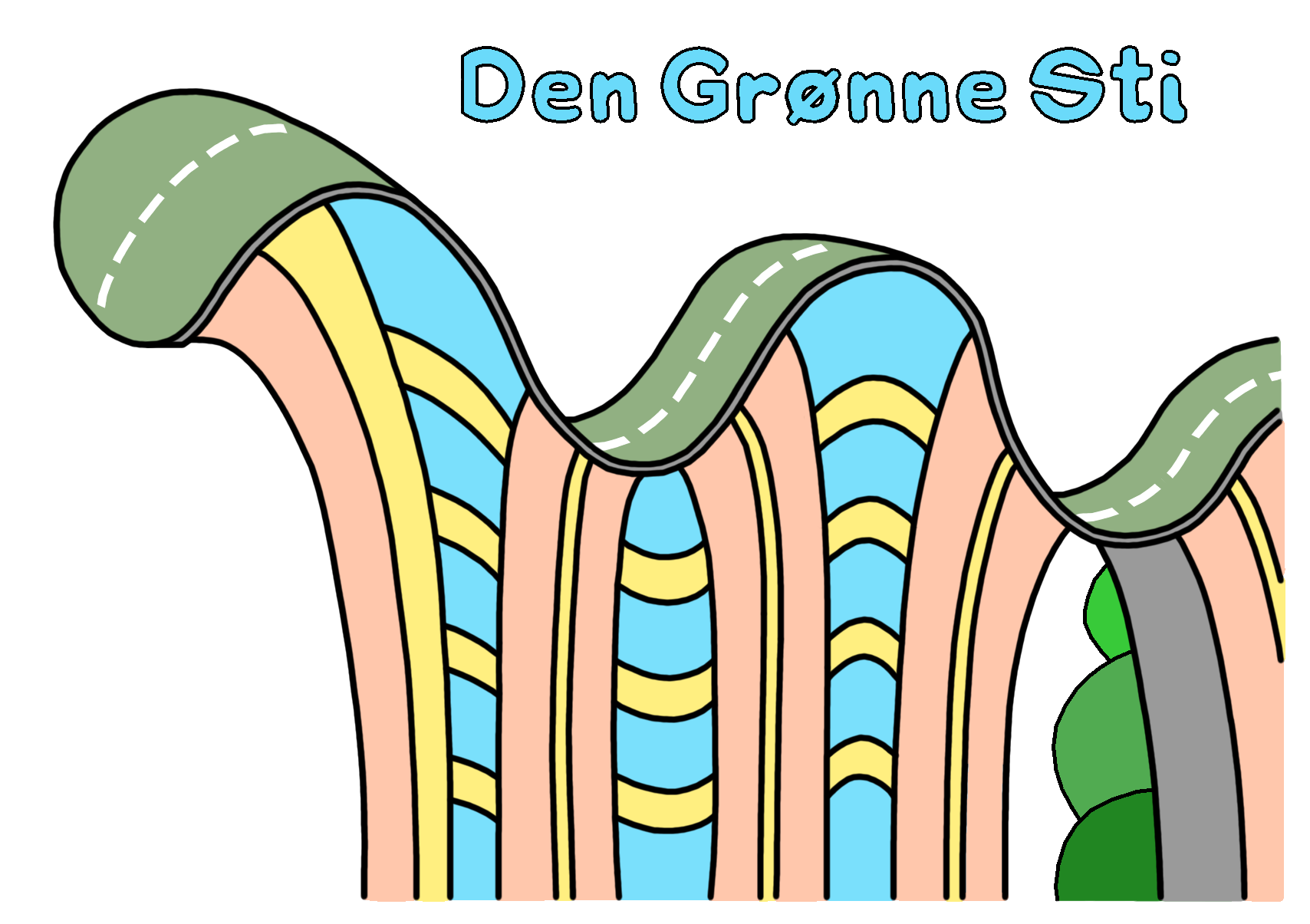 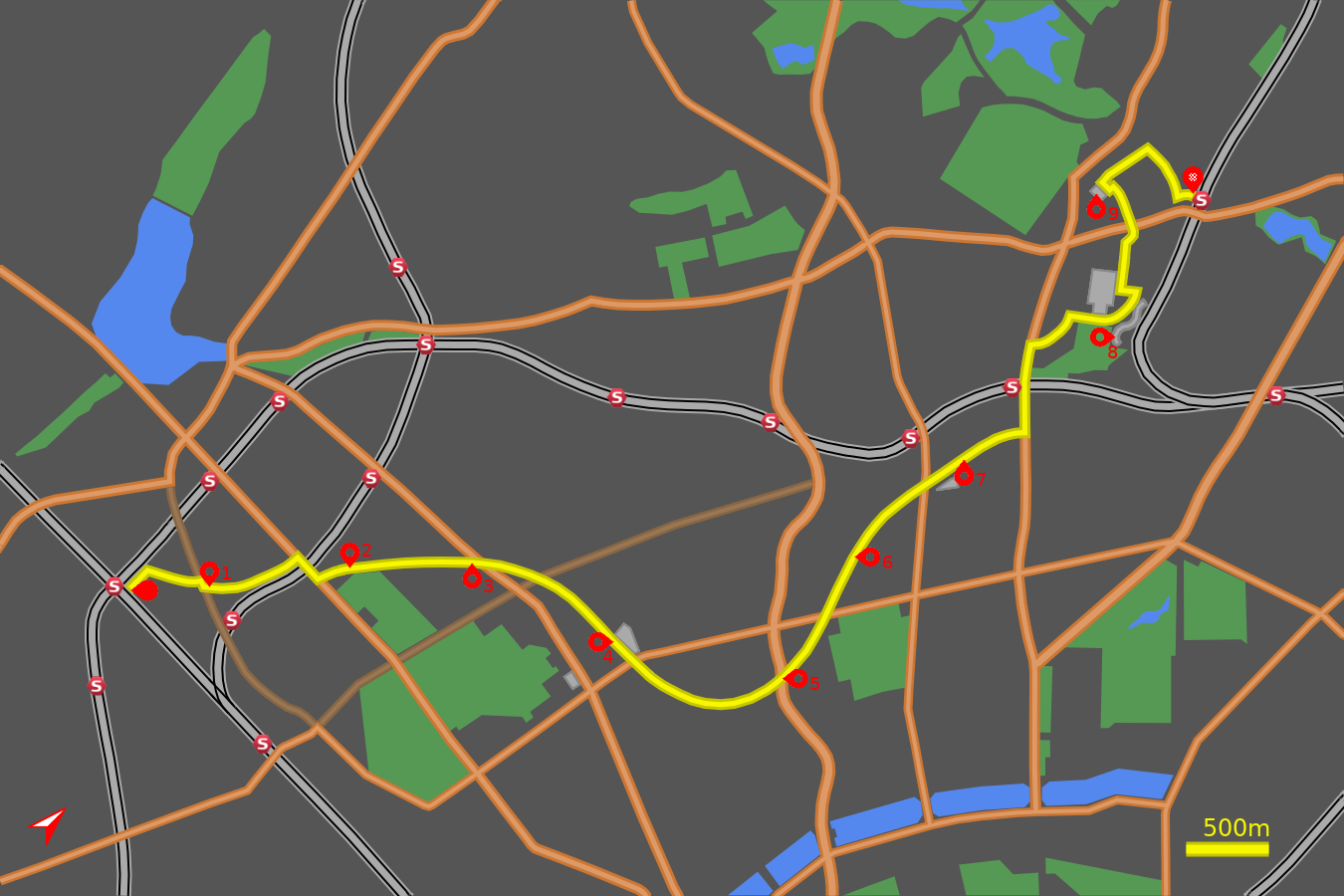 The Green Way (Den Grønne Sti) is a shared cycle and pedestrian route along the line of an old goods railway line. It snakes from the west of the City to the north through the districts of Frederiksberg and Nørrebro. With the trees in leaf it feels a long way from the centre of a major European city.

Where the line of the railway hits the buffers we skip off to visit leafy Bispebjerg and the remarkable Grundtvig's Church.

The following tour is linear in that it starts and ends at different S-train stations, (Danshøj and Emdrup), however they are both on the same line (B) that goes through the City centre.

The Green Way is designated cyle route number 51, however between Nordre Fasanvej and Thorvaldensvej in Frederiksberg it shares the track with the C99 super-route (connecting Copenhagen and Albertslund), and sometimes only the latter is signposted. Moreover from Thorvaldensvej to Jagtvej the track is shared by the C94 inner city ring route.

Start at the eastern side of Danshøj Station at the end of Ansgars Allé (GPS 55.66436 12.49398). From the upper B line railway take the exit marked Mod Hellerup and Mod Ansgars Allé.

Orient yourself northwards, parallel to the track by the side of the F line railway leading to Søndre Allé. Turn right onto Søndre Allé (GPS 55.66588 12.49444). Cruise along this quiet suburban street until you meet the busy thoroughfare of Valby Langgade.

1 Turn right onto Valby Langgade and after 50m use the left filter at the traffic lights to cross Valby Langgade to the official start of Den Grønne Sti at Monrads Plads (GPS 55.66758 12.50062) - a small undistinguished triangular area planted with trees.

The first stretch of dedicated cycle track passes between modern apartments blocks and after just 500m it ends where it joins the quiet backstreet of Sofus Franks Vænge. A further 150m brings you to the busy Roskildevej.

Turn right onto Roskildevej, passing under the railway bridge and at the next set of traffic lights (50m) turn left to rejoin Den Grønne Sti on the far side of Roskildevej (GPS 55.67224 12.50649).

2 The next secion of the cycle track curves round the "allotments" of the Haveforeningen Dalgas. The garden plots have very upmarket summer houses in all different styles. After some apartments on the right, the green avenues of the Solbjerg Park Cemetery open up.

A small road (Frederiksvej) is crossed then a slightly larger road (Kronprinsenvej) is similarly crossed without the assistance of traffic lights (GPS 55.67604 12.51203). A breeze past suburban detached houses ends when the track deposits you into the car park of the Hospice of Diakonissestiftelsen (Deaconess Foundation) on Peter Bangs Vej. This was inaugurated in 1863 as a Church-based hospice offering care. The original gothic-style building and chapel have been expanded over the years, and now the institution offers training in nursing and health care.

Pass by the cylindrical yellow brick office buiding and whizz along a short section of track to the complex junction at Nordre Fasanvej (GPS 55.68069 12.52201). Cross Nordre Fasanvej at the lights onto Howitzvej and where the cycle track dog-legs around a building take the filter lane on the left to cross the road at a small island. The cycle track continues through the trees. You soon reach the open modern campus of the Copenhagen Business School.

4 The track meets a short section of shared road (turn left onto Solbjergvej), which leads onto an open paved area (Falkoner Square) between the Business School and Frederiksberg Library. Shortly the old railway buildings can be seen sandwiched between the modern Gymnasium (High School) and Frederiksberg Shopping Centre. Once this was a busy railway junction with trains from Copenhagen centre heading west to Roskilde, but that line closed over 100 years ago and the inner part was swallowed by developments.

This paved section ends where you meet Falkoner Alle (GPS 55.68116 12.53415). Cross at the traffic lights and weave left and sharp right to rejoin The Green Way. If you have already partaken of the Vesterbro and Frederiksberg tour you will recognise this next stretch. The route crosses Thorvaldsenvej close to the University gardens (Landbohøjskolen) (GPS 55.68203 12.54100).

5 Cross another quiet road Rosenørns Alle and build up momentum for the approach to Åbuen, the stylish cycle bridge over the busy Åboulevard (GPS 55.68624 12.54520). This marks the boundary between Frederiksberg and Nørrebro.

The trail becomes more open now and weaves amongst green spaces and playgrounds (for both kids and grown ups). Cross Rantzausgade and so to the light controlled crossing of Jagtvej (GPS 55.69000 12.54392).

6 The next road you meet is Stefansgade and close by, to the east, is the fashionable shopping and café street of Jægersborggade. The earlier Nørrebro and Østerbro tour passed along Stefansgade on its way north.

The next section is known as Nørrebro Park and has an imaginative playground by the side of Stefansgade. Cross Hillerødgade and pass under the roofed space. The next major road you come to is Nørrebrogade (GPS 55.69905 12.54173).

7 Across the road is the start of the Superkilen area - a famed urban park - made up of the Red Square, the Black Square and the Green Park. Superkilen contains street furniture from cultures all over the world, for example lamp posts and manhole covers, and is intended to promote togetherness amongst the multicultural inhabitants of Nørrebro. The Red Square, with Nørrebro Hall behind, offers a view of modern metropolitan life with sports, café's and culture venues.

Across Mimersgade is the classical Black Square with its funky lines meant to guide people to objects, like the Moroccan fountain and the openair chess tables. Beyond the square comes the Green Park with rolling hills, picnic areas and sports pitches, again with furniture from all over the world.

The end of the repurposed railway track comes at the junction with Tagensvej (GPS 55.70476 12.54525). Turn left and head up Tagensvej towards Bispebjerg railway station.

To the north of the railway line are the trees marking the edge of Lersøparken. The official route of the Green Way continues alongside the railway to Ryparken station, but now we have come this far it would be a shame to miss out on some of the sites of Bispebjerg. After crossing the railway continue for 250m to the first set of traffic lights. Keep a sharp look out for a narrow cycle track on the right that appears between trees and bushes - take this track (GPS 55.70842 12.53987).

8 The track emerges onto Bispebjerg Bakke. Turn right and pass in front of the striking facade of Bispebjerg Hospital. To the right the open tract of Lersøparken bestows the air of a stately home to the hospital. The road now bends to the left between trees and on the right is the remarkable Bispebjerg Bakke housing development. Built as a collaboration between the artist/designer and the Union of Skilled Workers, its design and quality was intended to bring joy to the inhabitants. The separate blocks are joined by a snaking roof to create an organic community space.

Where Bispebjerg Bakke reaches its highest point turn left through a gatehouse into the grounds of Bispebjerg Hospital (GPS 55.71481 12.54396). The rural layout of buildings and gardens belies its status as a modern city and teaching hospital. The buildings and grounds contain many artworks and the gardens are cultured with rare and exotic trees.

Continue straight ahead for 150m to the crossroads with Ebba Lunds Vej. Turn right onto Ebba Lunds Vej and continue to where the road weaves around the red-brick chapel. On the far side of the chapel turn right in front of the gatehouse and immediatley left to the traffic lights on the junction with Tuborgvej. Cross Tuborgvej onto Bispebjergvej (GPS 55.71672 12.53844).

9 A further 300m on, where a grove of trees appears on the right, an opening on the left (På Bjerget) reveals the profile of the extraordinary Grundtvig's Church. Built in the 20th Century it is an effective blend of expressionist style, Danish country churches and gothic cathedrals. A competition was held to design the church, which was won by Peder Jensen-Klint, and the building and surrounding estate was completed by his son Kaare Klint, after his death.

The residential estate surrounding the church, also in yellow brick, was built around the same time to harmonise with the church. Circle round the church to appreciate all its sides. The west facade is particularly striking reminiscent of church organ pipes. The interior is unashamedly Gothic with its long narrow nave and high ceiling.

If desired an extension can be made across Frederiksbergvej to Bispebjerg Cemetery where in spring the cherry blossom arcades bring people from far and wide.

Return to Bispebjergvej and take the road opposite (Jeppes Allé) between the grove of trees and the row of terraced houses. Where this meets Bispebjerg Parkallé turn right. Continue straight ahead until just before the junction with Tuborgvej. Take the gravel path and cross the other side of Bispebjerg Allé onto Banebrinken and the end of our tour at Emdrup Station (GPS 55.72000 12.54132).

Trains to the City (Mod København) leave from the platfrom closest to Banebrinken.


Notes on The Reverend Grundtvig:

Nikolaj Frederik Severin Grundtvig (1783-1872) is not a name that is particularly well known outside his native country, but he is one of the most influential people in Danish history.

He provided the philosophical basis for educating and awakening the impoverished peasantry which resulted in the establishment of folk high schools. His hymns and poems have given him an important place in Danish literature.

The Grundtvig Forum is based in the Vartov building on Rainbow Square (Regnbuepladsen), opposite the Town Hall in central Copenhagen. Grundtvig was a pastor in the church there for 33 years. The Forum maintains his interests in the Church, School and Society.