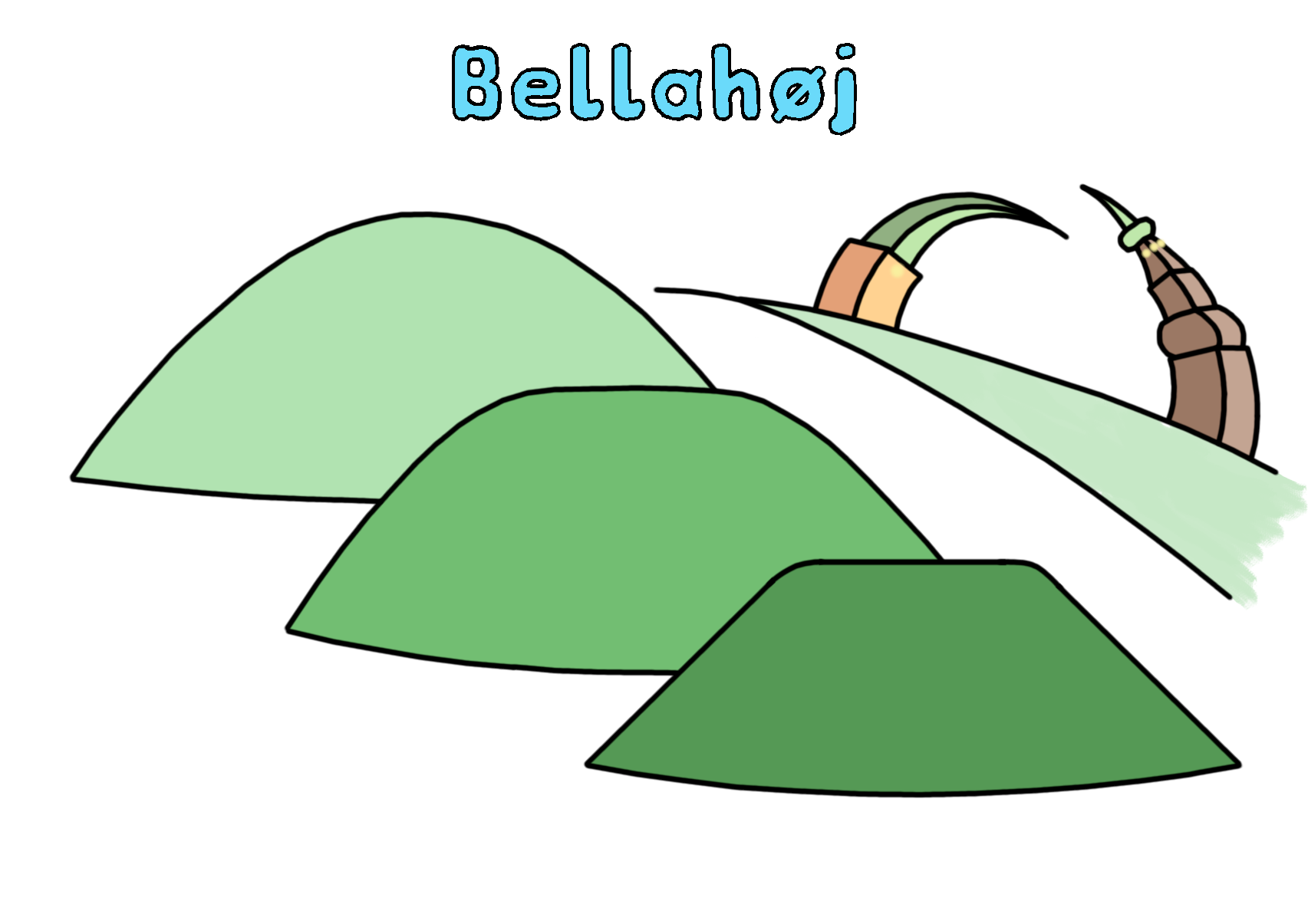 Denmark contains a wealth of prehistoric sites and artefacts from the middle stone-age through to the iron age. Perhaps the most visible signs of this occupation are the bronze-age burial mounds. Over 80,000 have been registered in Denmark and they can be seen scattered across the countryside.

The suburbs of Copenhagen have their share of burial mounds still in existence, and this cycle tour takes in those that are the closest to the City centre. It also takes in the green artery of the Harrestrup river (Harrestrup Å) to the reservoir of Damhussøen and its tributary alongside Grøndals park, before striking uphill to Bellahøj.

The burial mounds at Bellahøj are within the district of Brønshøj, however the name Brønshøj does not refer to these bronze-age mounds, (bronzealderhøj in Danish) but derives from a 12th century parish centered on Brønshøj church.

1 On the left is the start of Vigerslev Park where our route takes us. The cycle track begins on the other side of Gammel Køge Landevej heading south-west, so make a three-point turn at the traffic lights to reverse direction and just in front of the bus stop turn right onto the cycle track between the trees (GPS 55.64264 12.50122).

After a couple of slight bends the cycle track runs arrow-straight, north-west for almost 1 km beside the Harrestrup River, along the green avenue. On this stretch there are two minor crossings. A wooded area follows and ½ km further on brings you to the new cycle bridges over the motorway and high-speed railway track (GPS 55.65273 12.48710).

2 The motorway bridge is an elegant V-shaped cable stay bridge that sweeps over the road displaying your green credentials to the motorists stuck in their cars below. The railway crossing is, in contrast, hardly noticeable. The track sweeps down to signal-controlled crossing of Vigerslev Allé (GPS 55.65389 12.48464).

The track through Vigerslev Park, alongside the river, continues north-west, then turns north to cross Landlystvej at some lights. Cross the road and continue north for 250 m until just before the track bends left and disappears into a tunnel under the railway track (GPS 55.66326 12.47873).

On the right is a barrier which gives access to Kamhusene with blocks of flats on the left of this tree-lined road. At the end of Kamhusene cross the main road of Vigerslevvej to join Langagervej. Continue for 150 m to a fork in the road, take the left branch (Langagervej) and immediately on the left appears a large grassy mound occupying the front garden of the house. This is the Danshøj burial mound (GPS 55.66299 12.48609). It is on private land so please admire it from the road.

3 This mound has not been excavated so there is no confirmed date, but is assumed to be bronze-age by style. It does not occupy high ground so there must have been some other special reason for its location. Today it hard to imagine what was special about this location but it is possibly due to its slight elevation above the course of the river.

Turn round and return back along Langagervej to Vigerslevvej. Turn right and pass under the triple railway bridge. After the slight rise take the first left onto Hansstedvej (GPS 55.66534 12.48421). At the next fork bear right onto Mellemleddet and at the junction in front of the park turn right onto Engdraget. Continue down this suburban street to the end of Engdraget to where a barrier leads onto Roskildevej. Turn right and then immediately left at the traffic lights to join Peter Bangs Vej, which borders the east side of Damhus Lake (GPS 55.67268 12.48251).

4 The lake is an aritficial one, initially created in the middle ages, and now damned by an embankment along which Roskildevej runs. It was once connected to Peblinge Lake in the City by a canal that ran along Grøndal and Ågade.

At the eastern end of the lake a five-way junctions greets you (GPS 55.67706 12.48693). Counting anti-clockwise we want the 3rd exit, Grøndals Parkvej, with trees on its left. This ribbon park on the right, and the railway line (S-train F line) marks the border between the Frederiksberg kommune and the outer kommune of Vanløse. The park does not permit cycling so continue on the cycle track along Grøndals Parkvej.

As previously mentioned this shallow valley was the route for the canal linking Damhus lake with the City lakes. There is a slight rise approaching the junction with Jernbane Allé. Go straight across the junction to continue along Grøndals Parkvej to where railway bridges cross the road.

5 This is Flintholm station, a major junction with two S-train lines (C and F) the Metro and a bus terminal (GPS 55.68588 12.49839). Follow the cycle path as it weaves through the station concourse and emerge at the other end to continue along Grøndals Parkvej. Go straight across the traffic lights at the junction with C.F.Richs Vej, and 100 m further on turn right where Grøndals Parkvej turns from being a major road into a suburban avenue (GPS 55.68877 12.50236).

The road still runs parallel to the park and railway. Grøndals Parkvej ends where it meets Godthåbsvej at Grøndal railway station (GPS 55.69110 12.51562). Turn left onto Godthåbsvej.

The road begins its rise, gently at first, towards Bellahøj. At the first major junction with Hulgårdsvej continue straight across (GPS 55.69470 12.51004). To the right down Hulgårdsvej can be seen the white tower of Grøndals church.

The road continues gently upwards to where it bends to the left at the junction with Rødkildevej (GPS 55.69611 12.50780). A fine row of terraced houses lines the southern side of Rødkildevej. Instead of following the main road round to the left take the bicycle lane straight ahead (blocked to cars). This is the continuation of Godthåbsvej.

This final 100m uphill feels a lot steeper than it really is. With a final effort turn right at the traffic lights onto Bellahøjvej, and take a breather.

6 At your leisure breeze along Bellahøjvej to where a park appears on the right and a fine outlook over the City (GPS 55.69852 12.50815). The towers of St Nikolaj, Vor Frue, Christiansborg and the Town Hall are particularly prominent.

Conitnue for 250 m to a pedestrian crossing on the far side of the junction with Hvidkildevej. On the left is gravel track with barriers which leads into Bellahøj Park (GPS 55.70048 12.51030). Take this track into the park and take the first gravel track on the right.

A fourth burial mound is hidden away at the back of the park. To find it go past the third mound and turn left heading down hill. On the left is the large bowl of the open-air stage, like a Grecian theatre. At the bottom of the hill, just before the road, turn left through the trees alongside the pre-school, to where its playground ends. The burial mound is the barely conspicuous lump on the left with a few trees growing out of it (GPS 55.70304 12.50717).

When you are rested, or finished with whatever else you wish to do in the park, make your way back to Bellahøjvej.

Turn left onto Bellahøjvej heading north-east, passing the Bellahøj swimming pool on the right. At the next major junction with Frederikssundsvej turn right (GPS 55.70642 12.51425). A still larger junction with Borups Allé is now met. Our route goes straight ahead, but first take the bicycle filter lane on the left which gives access to the traffic lights controlling the straight-ahead option.

The effort to get up to Bellahøj is now rewarded with a long gentle descent. Continue down Frederikssundsvej over a couple of traffic light controlled junctions, as far as the junction with Nordre Fasanvej where the overhead railway line can be seen crossing the road (GPS 55.70109 12.53729).

Nørrebro station entrance is on the right just here. The station is notable for its functionalist design with the ribbed canopy. Catch the S-train from here (S-train F line), or cycle into the City by continuing down Nørrebrogade.

The official register of Danish prehistoric finds is the cultural heritage website The Cultural Heritage however this is a serious catalogue and not so user friendly. A more accessible site is the megalithic portal The Megalithic Portal which includes user contributed photographs.

Christian Jürgensen Thomsen (1788 – 1865) was a Danish antiquarian who formalised the chronological ages of stone age, bronze age and iron age based on the occurence of the different material artefacts in archaeological finds.

Jens Jacob Asmussen Worsaae (1821 - 1885) followed on from Thomsen and produced a systematic catalogue of all prehistoric monuments in Denmark in order that they could be preserved by law.