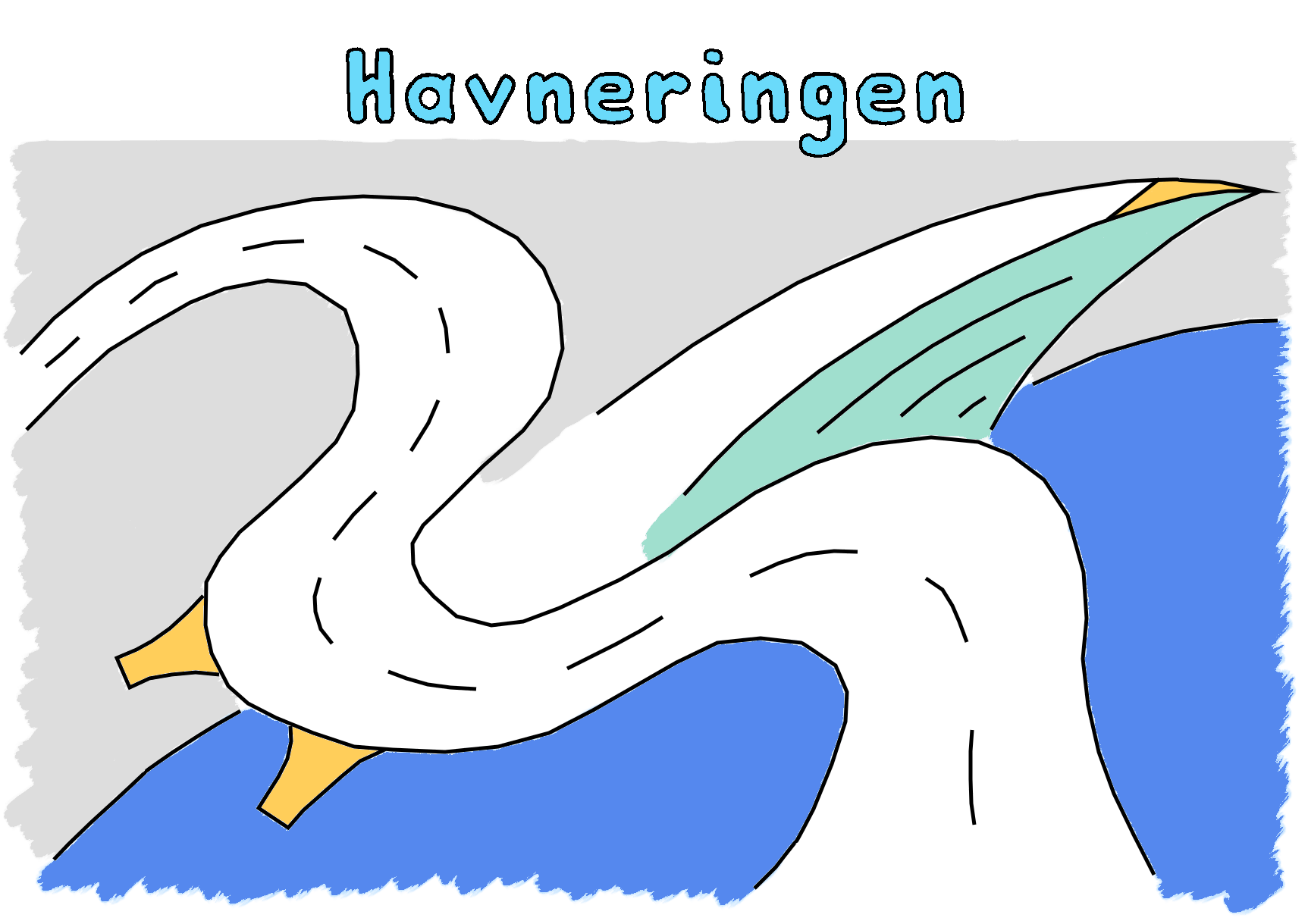 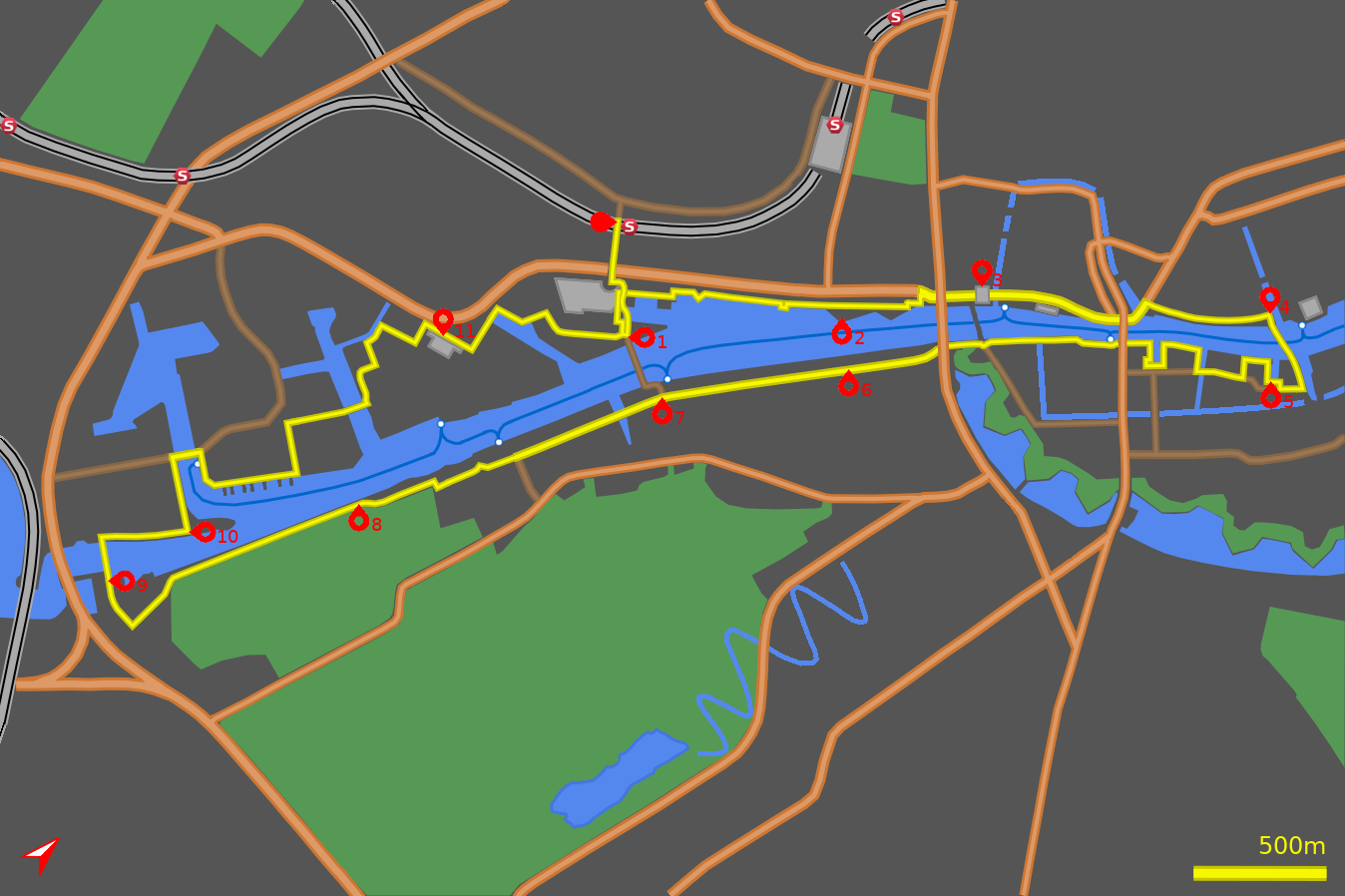 Copenhagen harbour (Havn) is the name given to the strip of water which separates the City of Copenhagen from Christianshavn and the island of Amager.

The following tour highlights the contrast between the original harbour frontage of the fortified city and the newer regeneration of the old industrial areas into desirable residential developments.

The Havneringen is an existing marked cycle-way (route 101) with information boards along the way. The route can be shortened if desired by using the various cycle and road bridges to complete a circuit.

The Harbour Bus runs the full length of the harbour and allows cycles to be taken onboard and gives access to this route at various points.

Looking left from the exit to the station you will see the mass of the Fisketorvet shopping mall. We will head towards this - a recent improvement to the bridge has resulted in a wide cycle lane.

Just before the shopping mall turn left onto an elevated cycle way - this is the reknowned Cycle Snake (Cykelslangen) - keep to the right and enjoy the ride.

1 Immediately at the end of the Snake (where it meets the flat and before the continuation bridge over the harbour) (GPS 55.66197 12.56501) make a U-turn to the right to go down a slight ramp. Turn left then right to go over a small bridge in front of the entrance to Fisketorvet Mall. Continue beneath the Snake until a sign (101) indicates a right turn by the aluminium clad hotel. (GPS 55.66303 12.56296). Take this (under the snake and through the hotel) and continue along the paved harbourside track, weaving round or through the buildings as appropriate.

2 Projecting out into the harbour is the Kalvebod Bølge (Wave). (GPS 55.66775 12.57288). This is a connected series of wooden platforms which sweep up and down allowing you to walk out over the water. Included is an exercise station if you are so inclined.

3 After the new cycle bridge (Lille Langebro) the road passes through the new Danish Architecture Centre (BLOX) and then between the old and new parts of the Danish Royal Library (The Black Diamond).

Under the next bridge (Knippelsbro) the road swings left with fine views of Borgen, Christianborg and Holmens Church. Turn R at the next lights to continue along the harbourside. (GPS 55.67606 12.58712). A wonderful green 1930's harbour building now called The Standard but otherwise known as the Gammelholm Toldkammer is passed before the road opens out at Nyhavn where the much delayed Indrehavnebro cycle bridge crosses the harbour. (GPS 55.67896 12.59299).

4 Pause to take in the views of lively Nyhavn before crossing the cycle bridge with wonderful views out to sea past the gravity-defying roof of the Opera House.

Shortly after crossing the bridge turn R onto Strandgade in front of the Corner 108 restaurant. (GPS 55.67786 12.59788). This is now Christianshavn and there are many fine old warehouses along this stretch. After about 50m turn right opposite the Arktisk Institut to an attractive harbour.

5 On the right is the North Atlantic House (Nordatlantens Brygge), a building dedicated to the art and culture of the Faroe Islands, Greenland and Iceland. Often an old whaling ship can be seen tied up at the wharf. Turn left then right along the edge of the quay to reach the main harbour. Continue along the front for about 50m until the way is blocked by a gate. You have to turn left and rejoin the road (Strandgade) turning right.

After about 100m on the road you cross a small bridge by the yellow Christianshavn Færgecafe. (GPS 55.67567 12.59244). Turn R here and regain the main harbour waterside until you come to the next harbour inlet. Skirt around this keeping the water on your right to regain the harbourside. The way now continues under Knippelsbro bridge. Keep to the harbourside crossing a couple of small bridges. Opposite the Black Diamond you cross the red Circle Bridge made up of 5 different sized circular platforms with masts to resemble a ship. 200m further on you reach the new cycle bridge (Lille Langebro). (GPS 55.67079 12.58149). Join the road (Langbrogade) to pass under the road bridge (Langebro).

After passing under the road bridge (Langebro) you enter the area called Islands Brygge. For most of the 20th Century this was mostly occupied by industrial and dockside facilities. However since 2000 it has undergone massive redevelopment into a desirable residential area. Evidence of the past industries can be seen in preserved industrial structures along this stretch. On a hot summers day the waterfront park (Havnepark) is bursting with sun worshippers long into the evening. The Harbour Baths give protected areas to swim in the harbour. In winter a mobile sauna is set allowing people to jump into the icy harbour waters. You can choose to cycle next to the harbourside if you wish, however it is all cobbled, so stick to the cycle lane on the road if you want a smoother journey.

6 The Islands Brygge Culture House (Kulturhuset) is passed on this stretch, where there is a cafe and performance space. There is plenty of choice of other cafe's and refreshment opportunities along this road.

7 Further evidence of the past industries can be seen in the concrete silos converted into residential blocks (adjacent to Bryggebroen). (GPS 55.66131 12.56949). Look carefully at The Wenneberg Silos and the Gemini Residences to see their history incorporated into their core.

Continue along the road southwards passing the many new harbourside apartment blocks. At a small dead end (for cars) continue to a paved area, next to a cafe, where it opens out at a lagoon. (GPS 55.65500 12.56469). There is a "beach" and bathing here. Cross where the weir overflows from the lagoon near the wooden boat houses. Continue past these to a blue signboard for the "Havneringen" describing the Nokken area. There is a small signpost indicating the cycle routes 6 and 101 - follow these to the right onto a gravel track. (GPS 55.65339 12.56345). The track runs along the side of the harbour with views across to the offices and residential areas of Sydhavn.

8 To the left are the Nokken and Sønderbro Haveforeningen (H/F) (think allotments but with holiday homes) and further east the vast common land of Amager Fælled. The track passes a "hill" on the left which can be climbed from either end to enjoy the view. After crossing a drainage ditch the track meets the more substantial track of the C94 "cycle superhighway". (GPS 55.64204 12.55585). Turn right here, then immediately, where the C94 and route 6 turn left, continue straight on through gates to Slusen (The Sluice).

9 Slusen is a weir and lock designed to regulate the level of water in the Harbour. The old lock-keepers house and engine building are preserved period features. Cross the weir by means of the bridge to Slusholmen where a houseboat community was established. (GPS 55.64350 12.55043).

The first stretch along the west side of the harbour (Sluseholmen) is an area of modern apartment blocks split by a grid of canals. Cross three canals by bridges to where the harbour opens up and the Metropolis apartment block sits on its own spit of land.

10 Turn left along the waterfront, crossing two more canals until you come to the road bridge (Teglværksbroen). (GPS 55.64728 12.55014). Turn right and cross the bridge. On your right is the waterbus terminus (Teglhomen). Stay on the road as it snakes left then right until you come to the modern school (Skolen i Sydhavnen). Immediately after the school there are traffic lights at a junction. (GPS 55.65134 12.55264). The official Havneringen route carries straight on here, but we will utilise a new bridge which retains more of the routes character. So turn right at these traffic lights (Teglshomsgade) and then first left (Topstykket). Cross the bridge and then turn immediately left, along a cycle track, to pass some quaint colourful wooden sheds. The cycle track bends round to the right to join a road (Elværksvej). Turn left along the road and to the right where it meets a canal.

11 Ahead is the H. C. Ørsted power station with the Diesel House Museum on the left. Immediately after the Diesel House turn left onto Energiporten and where the road meets overhead pipes turn right. Continue between the buildings of the powerstation to the next crossroads. Turn left (Tømmergravsgade) and continue to meet a harbour inlet, where many houseboats are moored. (GPS 55.65935 12.55806). Turn right along the far side of the harbour (Skibbroen) and follow it round to the left to a crossroads. Turn right to cross the canal (Havneholmen) and follow the road round to the left with apartments on the right and offices on the left.

To return to Dybbølsbro Station turn left and go up the Cykelslangen, then right at its end to cross over the main road and railway tracks.

Some notes on H. C. Ørsted:

Hans Christian Ørsted is perhaps the second best known Danish scientist after Neils Bohr. He lived between 1777 and 1851 and was the first to discover the direct relationship between electricity and magnetism (a wire carrying an electic current will deflect a magnet needle). This led to the unifying of the electromagnetic laws described by Maxwell, which in their turn led to Einstein's theory of Relativity.