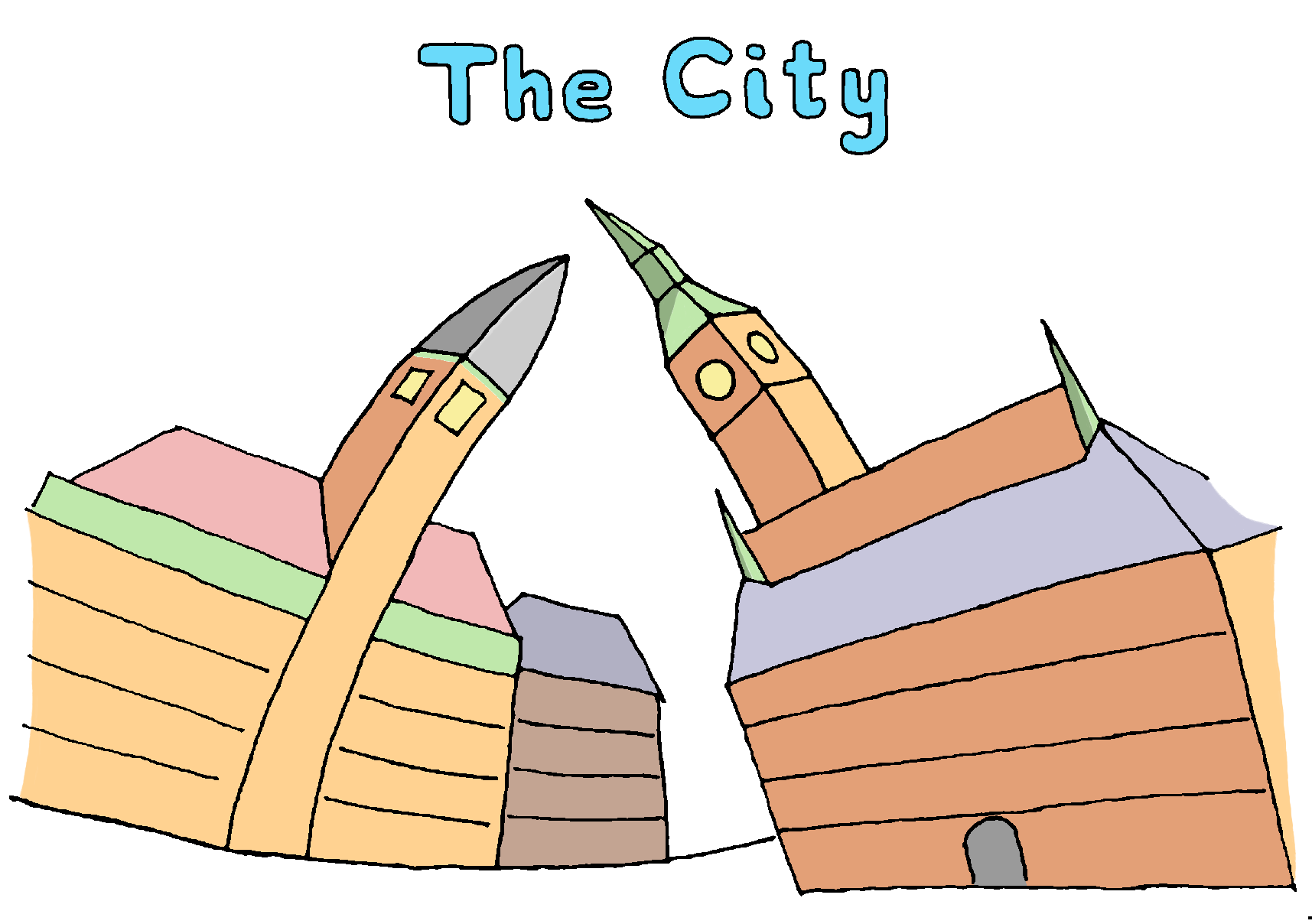 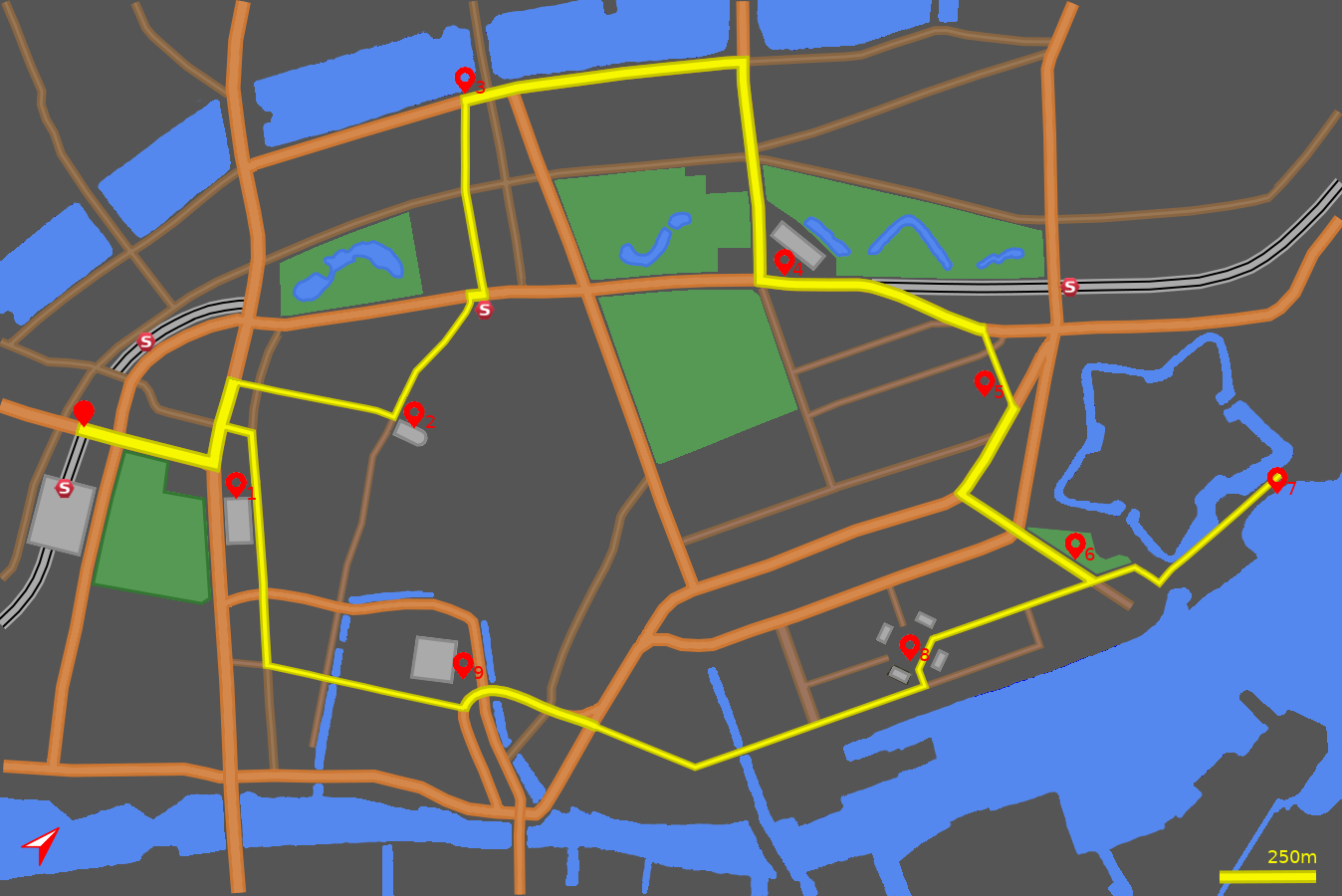 Copenhagen is rightly reknowned as a cycle frinedly city, the number of bicycles and different types of bicycles is phenomenal. For the visitor there are plenty of opportunities to hire bicycles.

But to create an all-encompassing tour of the city sights there are a couple of gotchas; the first being the pedestrianised center where bicycles have to be pushed, and the second being the cobbles where bicycles may wish to be pushed if you do not have a padded bottom.

The following tour attempts to make the best of the possibilities for a cycling tour that takes in all the major sights while minimising the aforementioned issues. Along the way there is, of course, so much more to see than can be covered in this brief guide. Part of the joy of exploring a city is discovering things which are not necessarily the "famous" sights and views.

So let's begin by appreciating the immediate surroundings. The north entrance to the Central Station shows a symmetric brick facade with a central tower. The station was built in 1911 to replace two previous ones. Beneath the road the railway tracks run through a tunnel and cutting to the submerged platforms.

Across Versterbrogade is the SAS building (Radison Hotel), maybe not so remarkable today, but in its time (1960) a revolutionary concept in Europe. Today it is simply a hotel but it was built as the hub for travellers connecting to SAS flights from the airport. It was designed by Arne Jacobsen, most famous for the "syv-er" or "severn" chair; (the Danish are serious about their chairs and the Design Museum on Bredgade has a permanent exhibition of them).

Between the two, in the middle of the road, is the Liberty Column (frihedsstøtten) which commemorates the peasant reforms in 1788 when serfdom or bonded farming was outlawed. The original column dates from 1797 but the present one is a restoration from 1999. The inscription on the west side begins with the line "Kongen bød stavnsbaandet skal ophøre" which translates to "The King ordered serfdom shall cease". The female figures represent bravery, civic virtue, fidelity and the industrious cultivation of land.

OK enough of history, let's start cycling. Turn those legs over heading north-east along Vesterbrogade. Cross the large junction to the corner of the block housing the Tivoli amusement park, the main entrance to the park is a short distance further. The park was opened on the 15 August 1843 and it still runs a classic wooden rollercoaster from 1914 amongst other attractions.

1 After Tivoli we cross a major thoroughfare (H.C.Andersens Boulevard) where the huge bulk of the town hall (Rådhus) appears on the right. We will be returning this way so avert your eyes for now and concentrate on getting across this road and turning left onto the cycle lane on the far side. (GPS 55.67586 12.56805). You will shortly pass a bronze statue of a soldier holding a rifle and carrying a hornblower - it commemorates the Prussian wars of 1848-50 and 1864.

2 At the next crossroads turn right onto Studiestræde (GPS 55.67742 12.56629) and at the next lights go straight across continuing down the now narrower Studiestræde. Continue along this street admiring the variety of buildings and shops until you come to the T-junction with Norregade and The Church of Our Lady (Vor Frue Kirke). (GPS 55.67934 12.57195). This is the national cathedral of Denmark and was completed in neo-classical style in 1829. There have been a number of previous incarnations of the cathedral built on this site over the centuries which were destroyed by fire.

In the small square opposite the entrance to the cathedral (on Bispetorv) can be seen the Reformation Memorial erected in 1936 to commemorate the 400 year anniversary of the conversion of Denmark from a Catholic to an Evangelical-Lutherian faith. It has four bronze reliefs depicting the key events from 1536 and 1537, which occured only 15 years after Martin Luther had reaffirmed his new faith at the Diet of Worms.

The tour now continues by turning left along Norregade, soon passing St Peter's Church (Sankt Petri Kirke), the walls of which survived the Copenhagen fire of 1728 and the British bombardment of the city in 1807.

Norregade ends where it meets the wide Nørre Voldgade. (GPS 55.68288 12.57072). Continue in the same general direction across this busy street onto Vendersgade. A little further is the Torvehallerne on the right (a street food emporium) and on the left the large paved square of Israels Plads.

3 At the end of Vendersgade the view opens out onto the lakes which once formed a part of the water defences of Copenhagen. (GPS 55.68562 12.56484). Turn right along Søtorvet and Øster Søgade and continue straight across the large junction with Frederiksborgade. At the next major junction with Sølvgade turn right, heading south-easterly. (GPS 55.69077 12.57155).

4 At the next junction with Øster Farimagsgade go straight across. The street opens out with trees on both sides. On the right the Royal Library Garden and on the left the gardens of the National Gallery of Denmark (Statens Museum for Kunst - SMK).

At the next junction with SMK on your left (Georg Brandes Plads), turn left onto Øster Voldgade. (GPS 55.68749 12.57845). If you could use a break the manicured gardens of Rosenborg Castle are open across the junction from SMK.

5 Continue along Øster Voldgade until the yellow terraces of Nyboder (New Houses) appear on the right. These houses were originally built for personnel of the Royal Danish Navy, and they are not so new, being built in stages from 1631 until 1795. The yellow colour of the houses is a very particular hue and is known as "Nyboder yellow". Turn right onto Krokodillegade at the last row of terraces (GPS 55.69028 12.58624) and continue onto the cobbles until the T-junction with Store Kongensgade and turn right here.

6 At the next set of lights turn left onto Esplanaden. (GPS 55.68734 12.59033). Continue down Esplanaden with the pleasant green space of Churchill Park on your left and the ramparts of The Citadel (Kastellet) behind. The park contains some notable statues and memorials; the bust of Winston Churchill and the dramatic statue of Valkyrie are notable. There is also an obvious wartime bunker sprouting from below ground. At the end of the park turn left towards the Anglican church of St Albans, part of the Diocese in Europe of the Church of England. (GPS 55.68807 12.59659).

7 Overshadowing the church in spectacle, if not in height, is the adjacent Gefion Fountain. This depicts the mythical story of the Norse goddess Gefjon creating the island of Zealand, on which Copenhagen lies. Now head towards the harbour and go through the large gates and turn immediately left onto the marked cycle track under the pedestrian bridge. Continue along this track, alongside the moat of Kastellet, passing beneath the Langelinie Pavilion. Soon you will encounter the tourists swarming around the statue of the Little Mermaid. (GPS 55.69284 12.59901). But more impressive are the views across the harbour to Nyholm, Refshaleøen and the Trekroner fort.

Return the weay you came along the cykle track to the gates by the Gefion Fountain. Go through them and bear to the left in front of the church. At the next junction the view down Amaliegade to the distant statue of Frederik V is enticing. (GPS 55.68807 12.59659). So carefully cross the junction and follow your nose.

8 As you approach the statue the reveal of the Amalienborg palace is dramatic. The square is a pedestrian area so dismount and walk across the cobbles. The four palaces are the royal residences with guards on duty. Although you can virtually walk up to the front door it is unlikely that the Queen will invite you in for tea. At midday every day the changing of the guard occurs here (with bands playing when the Royals are in residence). Our route leaves the square by the entrance on the left, heading for the harbour and the Opera House beyond. This is Frederiksgade which leads onto Tolbodgade. Remount your bicycles and turn right along Tolbodgade. (GPS 55.68361 12.59464). The road opens up into St Anne's Place. Continue straight on to where the road opens again at Nyhavn.

Nyhavn (New Harbour) is clearly quite old (constructed around 1670) with brightly coloured townhouses and a collection of historic ships. It used to cater for the needs of sailors, now the tourists flock to its bars and restaurants. Our route continues across Nyhavns Bridge and onto Holbergsgade. After a bend to the right the imposing mass of Christiansborg comes into view.

9 Cross Holmensbro heading for the imposing mass of Christiansborg. To the left of the main building on Christianborg Slotsplads is white limestone wing with a single tall arch. (GPS 55.67573 12.58128). Ignoring the security bollards go through this into Rigsdagsgården. Here you can find the entrance to the tower (Torvet). At the other side of this square is another white limestone wing with five arches. Take the leftmost one which leads onto Tøjhusgade passing the Royal Arsenal Museum (Tøjhusmuseet).

Next you cross a canal (Frederiksholm Kanal) by the Prinsens Bro. Seen to the left is the new Danish Architecture Centre (DAC) and the much older yellow painted buildings which are government offices.

Continue straight along Ny Kongensgade with a notable timber-framed house on the left. At the next lights turn right onto Vester Voldgade with the high tower of the Town Hall (Rådhus) pointing the way. (GPS 55.67336 12.57519). Pause to look at the view of Christiansborg down Ny Vestergade with the entrance to the National Museum on the left. Further along, opposite the Town Hall, the open space on the right is Rainbow Square (Regnbuepladsen). The paving is designed to resemble the burial plots that were found beneath the square, and on the raised plinths is etched a story by H. C. Andersen called From a window in Vartov, which tells of a child that is swallowed by the ground. The Vartov, the brick building on the souh-east side of the square, is a historic almshouse.

1 Ahead, among the trees, is a column with a sculpture of two figures blowing lures, which are an ancient Danish musical instrument. And beyond is the Rådhusplads where the towers of the Town Hall, the Palace Hotel and the Bristol Hotel evoke a Tuscan square. Go round the square and cross H.C.Andersens Boulevard, turning left then right (GPS 55.67586 12.56805) to return to the Central Station along Vesterbrogade.

Some history in the street names:

You have cycled along Vester Voldgade, Øster Voldgade, and crossed Nørre Voldgade. The word "vold" means rampart and these streets (gade) originally ran along the inside of the city walls. It is clear from the architecture of the buildings either side of these streets that they mark a discontinuity in time. Old maps (www.cph1761.dk) show the ramparts, bastions and moats as zig-zag structures which can still be seen in the defences of Kastellet and outline of the lake surrounding Christianshavn, as well as in the lakes in the parks Østre Anlæg and Ørstedsparken. The city walls had gates (port) and these are indicated in the names of the railway stations at Vesterport, Nørreport and Østerport.

The ramparts were part of a larger defensive structure including the lakes (sø) outside the ramparts. Vester Søgade, Nørre Søgade and Øster Søgade run alongside these lakes. And the boroughs (bro) beyond these lakes are indicated by Vesterbro, Nørrebro and Østerbro, with their attendant high roads (gade).