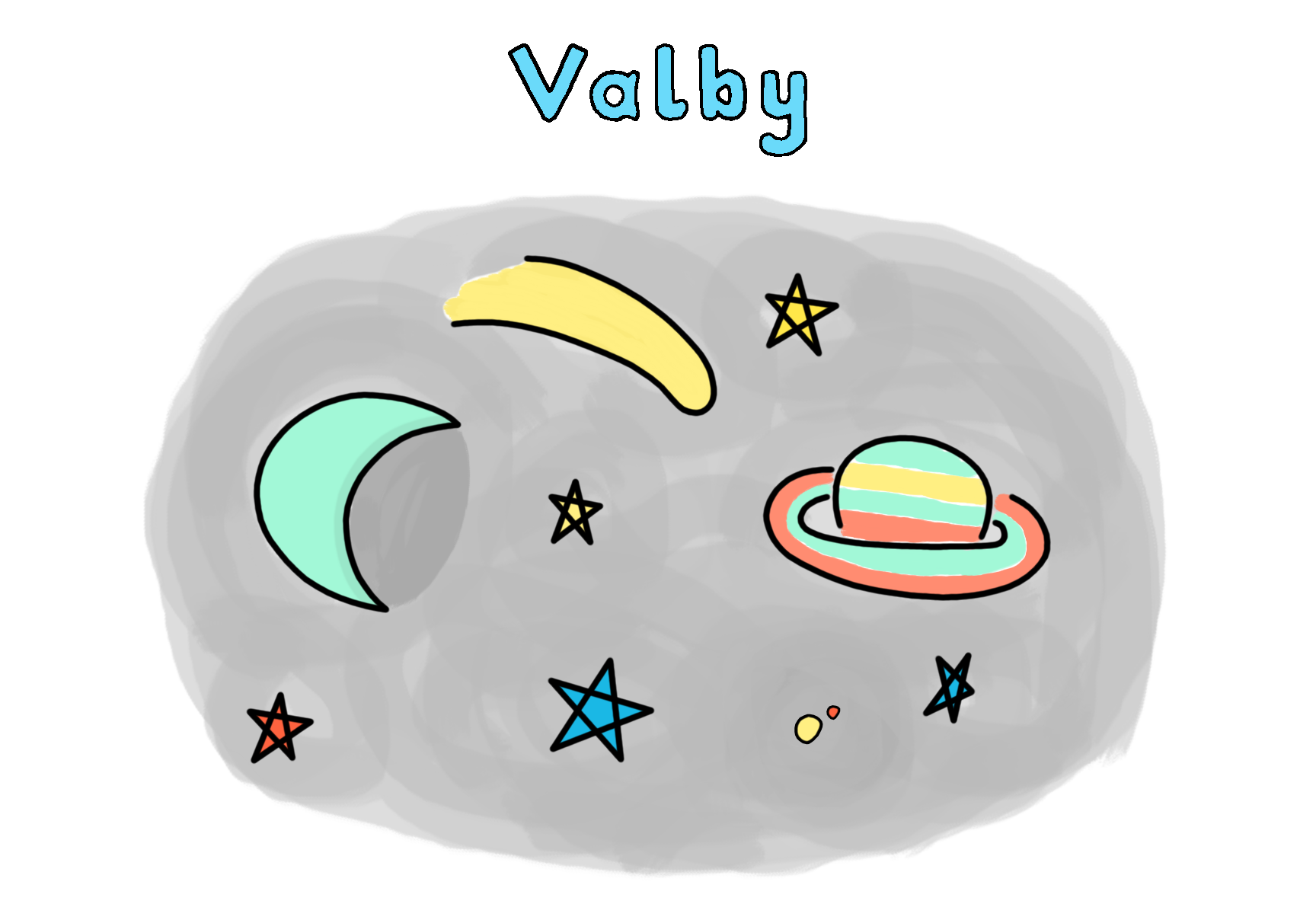 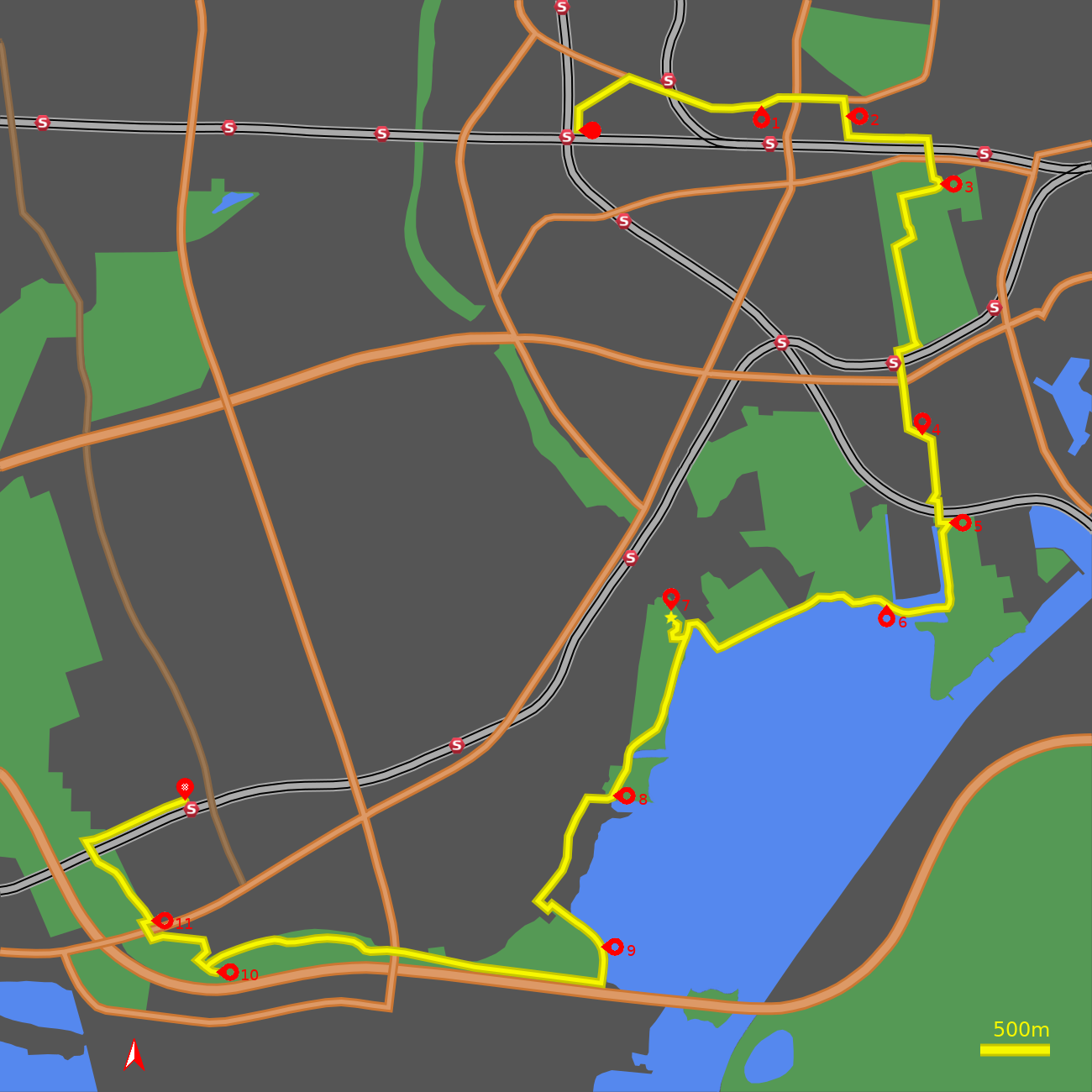 Valby is a district of Copenhagen to the south-west of the City. In the past Valby hill created a natural barrier to the spread of the City westwards, which is now marked by the green axis of Søndermarken and Vestre Kirkegård.

For a while the road through the village (Valby Langgade) was the highway from Copenhagen to Roskilde, bringing business to the area, but when this was re-routed along the present day Roskildevej those businesses declined. Instead it grew as a summer retreat for the well-to-do, like Frederiksburg to the north.

The south of the district is occupied by the green expanse of Valby park. It contains themed gardens and leisure pursuits, including a new beach where it meets the bay of Kalveboderne.

The following tour takes in a diverse set of neighbourhoods from Valby village, through the Western Cemetery, to the green areas of the coastal parks, and linking to the western defences (Vestvolden), via a scale model of the solar system.

Note: The map (above) and photographs can be enlarged by clicking on them (opens in a new browser tab). On the map north is 0° clockwise, i.e. at 00:00 on an old school analogue clock.

Start at the eastern side of Danshøj Station at the end of Ansgars Allé (GPS 55.66436 12.49398). From the upper B line railway take the exit marked Mod Hellerup and Mod Ansgars Allé.

Cycle up Valby Langgade to pass under the S-train line at Langgade Station. A further 100 m brings you to the modern apartments of Langgadehus on the right - the bold exterior hides inner courtyards and terraces. Next comes the warehouse-like Valby School, which occupies buildings that were previously part of the Norden Porcelain Factory.

1 A 200 m straight run brings you to a cobbled section of road which marks the heart of Old Valby (GPS 55.66610 12.51345). The streets and square on the right house some of the oldest extant buildings of Valby, while on the left Mosedalvej leads to the studios of Nordisk Film which are the oldest, continuously active, film studios in the world.

After the cobbles the buildings close in and the cycle lane disappears. Across the traffic lights at the junction with Søndre Fasanvej the road rises up Valby hill. The cycle lane reappears after the junction with Gammel Jernbanevej. Shortly after trees appear on the right, with a 2nd world war bunker hiding under the first of these. Turn right here onto Kirkevænget (GPS 55.66643 12.52194).

2 Ahead of you is the impressive basilica and free-standing bell tower of Jesus Church, as if plucked from a Tuscan hill town. It was commissioned by Carl Jacobsen of Carlsberg fame. In the gardens on the right, as you approach the church is a statue of "the Troll that smells Christian blood", reaching out towards the more classical crucifiction statue in front of the church.

Go round the church and at the end of the road turn left onto the cycle track (Banevolden) that runs parallel to the railway. This region between Valby Langgade and the railway is resplendent with many luxury villas.

The cycle track climbs gently up Valby hill to where the grounds of Carlsberg brewery are met on the corner of Gamle Carlsberg Vej. Take the right turn to cross the impressive iron Carlsberg bridge (1910) (GPS 55.66387 12.53053).

On the other side of the bridge Vestre Kirkegårds Allé descends gently. The villa on the left is now part of a school, while on the right are the walled grounds of the Western Cemetery (Vestre Kirkegårds). After a bend left then right the main (gated) entrace to the Cemetery is found (GPS 55.66156 12.53182). It is open from early until late and cycling is permitted on the main tracks. The Catholic Cemetery occupies the adajcent plot to the east with the Jewish Cemetery east again.

3 Go through the gateway into the main cemetery. The Western Cemetery is the largest cemetery in Denmark. It feels more like a park or arboretum with a variety of trees from around the world, and is used as an open-air space by the locals. It contains the graves of many famous Danes, artists and businessmen, including a corner with Prime Ministers of the Social Democrat party. Interstingly the cemetery contains both an area for British War Graves and a separate area for Germans from the Second World War who died in Denmark.

We will leave the Cemetery by the south-west corner, so feel to explore the cemetery at will. However for those that would like some guidance turn left in front of the statue to "For the Fallen" which commemorates Danes who were killed during the German occupation in the Second World War. After a bend to the right the track continues to pass in front of the Northern Chapel (Nordre Kapel). To the left a lawn stretches down to the sunken lake. At the next crossroads turn left which skirts the garden and lake to the left. Where this track meets bushes ahead at a T-junction, turn right and continue to a circular junction. On the left an iron arch marks one of the intersecting paths which meet at the central Southern Chapel. Take the broader track on the left heading south, down a tree-lined avenue. Stay on this track until it meets the fence at the south end of the cemetery. Go through the gate onto a cycle track (Sydbanestien) and turn right to meet Sjælør Boulevard at Sjælør railway station (GPS 55.66188 12.52750).

4 On the right Sydhavn library and the Karens Minde Culture House occupy the building known as "Sydhavn's Palace". The Dutch Renaissance style of the west wing has the air of a palace but it was never intended as such, instead it was built as a mental asylum in 1879. This continued for over 100 years until around the turn of the century it was converted to the culture house and library.

At the bottom of the cycle ramp a tarmac track (Hf. Musikbyen) crosses east-west. We will take the gravel track straight ahead that goes through a fence at a cattle grid (GPS 55.64229 12.53283).

5 This semi-wild area is known as Tippen (The Tip), as it used to be a land-fill site. Now sheep and llamas graze the grasses and nature lovers look after this conservation area. The gravel track leads down to a canal with the houses of H/F Musikbyen on the far side. At the southern end another cattle grid leads out onto a larger gravel track. Turn right and cross a bridge where the canal widens out.

6 The track runs between bushes until opening out into Valby Park where a sandy beach is a recent addition (GPS 55.63701 12.52680). The bay here leads out past Avedøre to the open sea of Koge Bay.

Valby Park is kept to provide many open spaces for games and sports. It also features a number of themed, round gardens, a large rose garden, an adventurous sculpted childrens playground and a café. Our route will stay close to the water but feel free to explore the park.

Follow the track along the coast, leaving the gardened grounds of the park, past the windsurfers club, to where the track bends right at an inlet. This little bay is a magnet for birds - waterfowl and gulls. The track crosses a bridge over the Harrestrup river to a T-junction (GPS 55.63595 12.50635). Turn left here, signposted Kystagerstien, Hundige, Avedøre Holme.

7 Shortly after the track forks, take the right branch if you wish to ascend the mountain to find the start of the Planet trail. Take the next fork right and ascend the S-shaped track to the summit. There you get views over the suburbs of Hvidovre and out over the Kalvebod bay. The shining sculpture is a scale representation of the Sun, the scale being one-billionth the real size. There is also an information board for the Planet trail. The planets are represented in size and distance on the same scale, consider that when you see the Earth modelled as a ball just 12 millimeters across.

Return down the same track passing Mercury, Venus, Earth and Mars and turning right to regain the coastside track. After 200 m the track turns inland. Cross a gravel track then take the left fork to continue south along a tarmac trail. A further 300 m brings you to Jupiter, the largest of the planets.

8 The track curves around a sea inlet and continues to Hvidovre harbour. Just before the carpark you encounter the planet Saturn with its rings.

The cycle track disappears for 1 km, so turn right onto Strandhavevej and at the first crossroads turn left onto Hvidovre Strandvej (GPS 55.62606 12.49586).

Continue down Hvidovre Strandvej, between the suburban houses, until at a very slight rise a yellow-brick school appears on the right. At the pedestrian crossing take the steps down on the left (signposted Dæmningstien, Tårnby, Vestamager) (GPS 55.62023 12.49079). After 50 m go through the barrier on the left, and then right to once again meet the coast.

9 The dyke curves to the right and half-way round you meet the next planet Uranus.

Ahead of you is the main E20 motorway. Just before the track disappears under the motorway take the turn to the right alongside the field (GPS 55.61554 12.49746), signposted Strandengstien, Hurdige, Brøndby Strand.

Continue on this westerly track, through woods and past lakes, crossing a dead-end road (Tårnfalkevej), to where the trail turns sharp right and meets a wider track (Mågevej).

Having taken in the view from the outer reaches of the solar system return to the junction with Mågevej and turn right where there is a small carpark. Then turn immediately left onto Strandvangen. Hidden in the trees on the left is a moat and bank marking the southern end of the outer Copenhagen western defences (Vestvolden).

After 100 m a cycle track running parallel to the embankment appears on the left (Voldgaden). On the corner are gunpowder magazines dug into the embankment. Take this cycle track to where it meets the main road of Gammel Køge Landevej- A signal controlled crossing is 40 m to the left (GPS 55.61844 12.45105),

11 Cross Gammel Køge Landevej and backtrack the 40 m to the right to regain the cycle track east of the rampart. Take this cycle track on the left (signposted Voldgaden) heading north-west. Information boards along this stretch give further details of the defensive structures. Immediately after crossing the railway turn right, signposted Avedøre station (GPS 55.62347 12.44531),

Take the train from here back to central Copenhagen. Or if you would prefer to cycle back the C77 cycle super-highway is just to the south running along Gammel Køge Landevej, however it is not the prettiest route unless you are into car dealerships in a big way.


Notes on the Planets:

To much dismay Pluto lost its official planetary status in 2006 when the International Astronomical Union decided to reclassify it as a dwarf planet. This was primarily done because it was felt that many similar sized objects would be discovered in the outer solar system, and they didn't want a plethora of new planets.

NASA's New Horizons satellite flew past Pluto in 2015, having been launched in 2006. Pluto was found to be a much more dynamic system than could have been imagined for a body in the outer regions of the solar system.