Enough of Hygge - 2 - Christianshavn and Refshaleøen 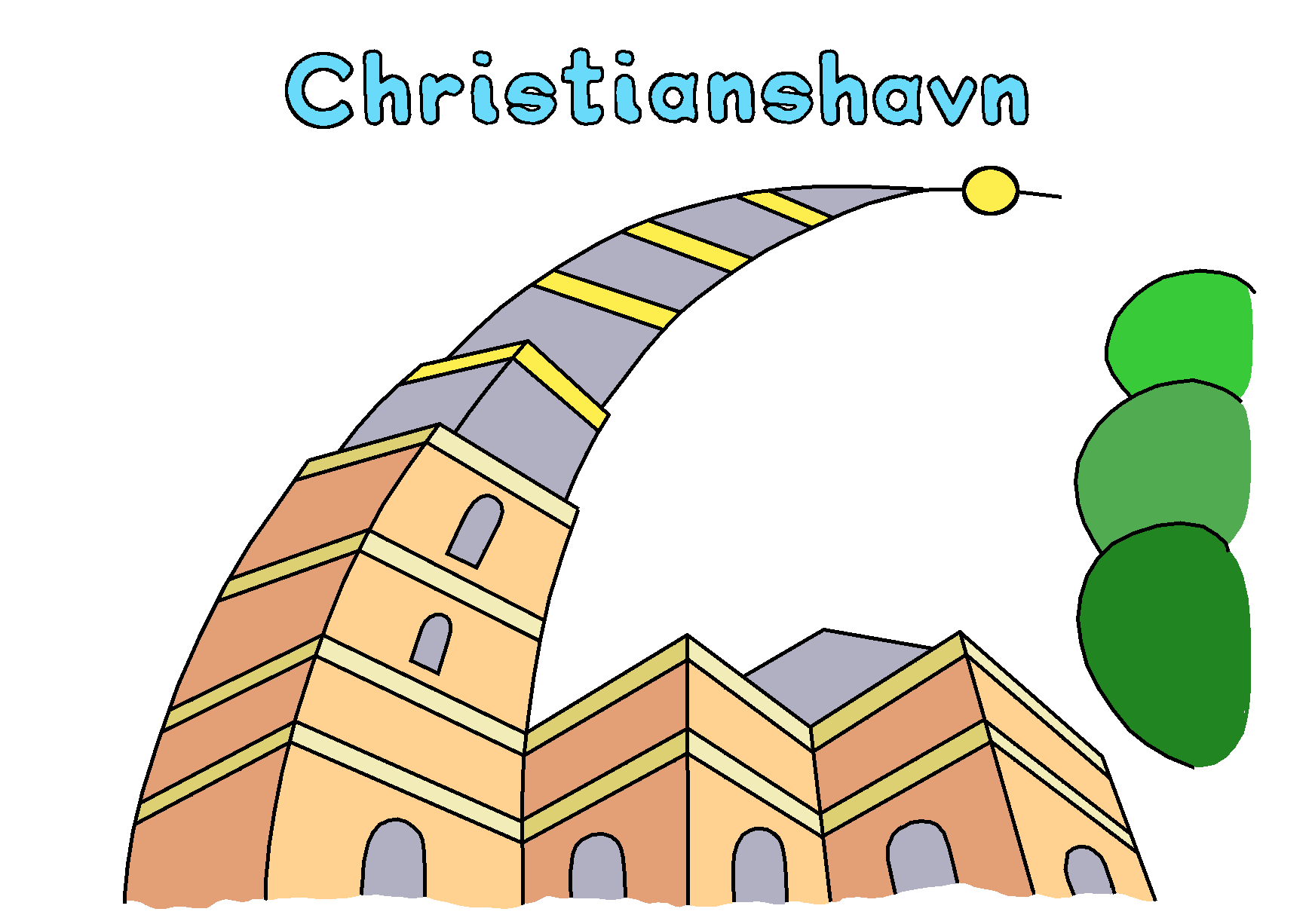 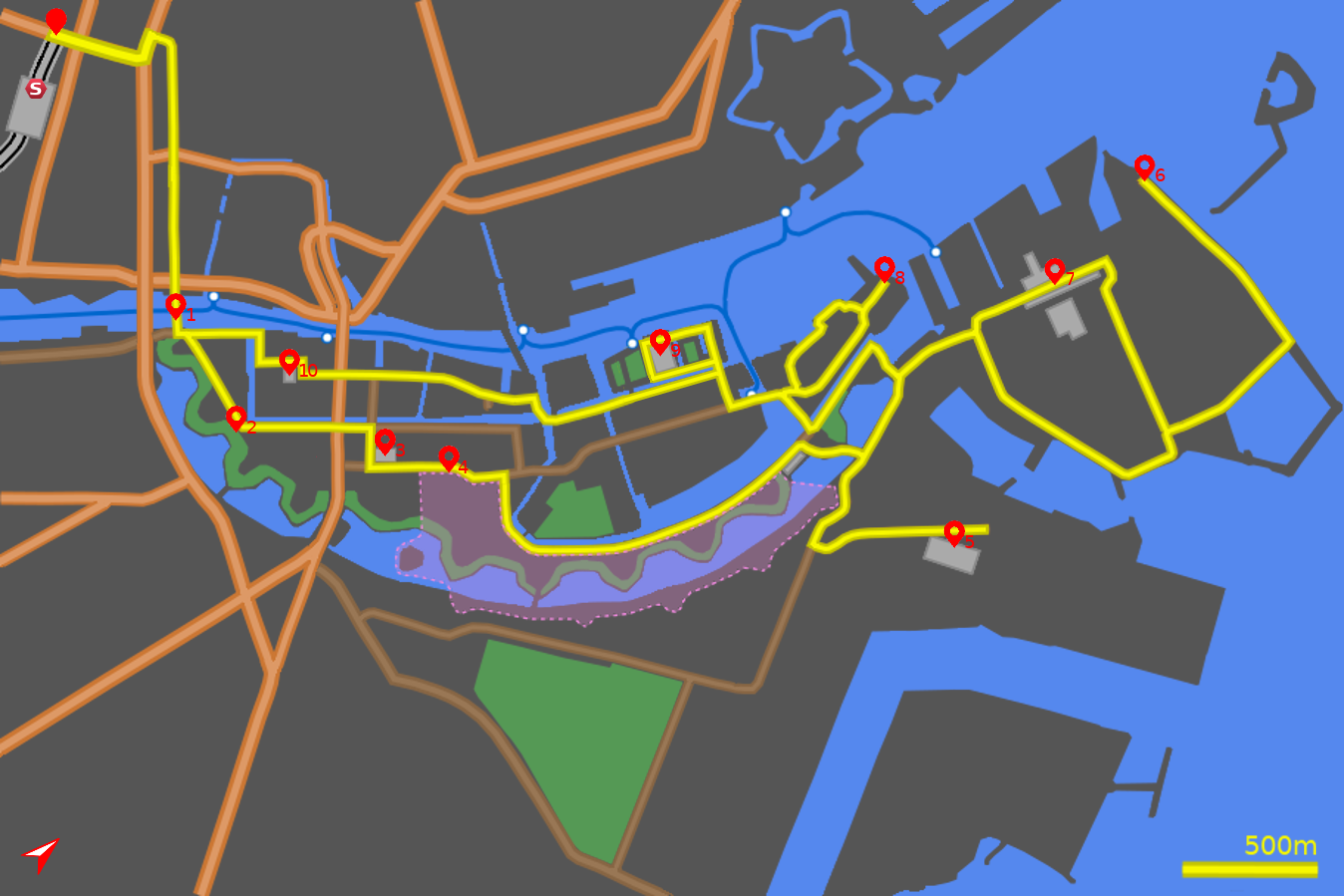 Highlights: Alternative lifestyles.
Canals and the sea.
Shipbuilding and the navy.
Vor Frelsers Church and the Opera.
Distance: 19 km.
How Busy:

East of the city centre (across the harbour) lies the bohemian neighbourhood of Christianshavn, and to its north the industrialised area of Refshaleøen, which itself is being gentrified. Christianshavn began to be developed in the early 17th century by Christian IV as part of the fortifications of Copenhagen. Originally it grew as a merchant's town with influences from Dutch cities but it soon became incorporated into the City proper. Split by canals it has a nautical feel, including as it does the Naval port of Nyholm.

The following tour highlights the long history of the area which still is revealing its potential. The harbour front between Langebro and Inderhavnsbroen is covered in the next chapter (Havneringen) so this tour will explore inner Christianshavn before returning to the waterfront at the Opera house and Nyholm. Although on the map the route appears to weave in, out and roundabout, it feels more natural when under way.

There are no S-bahn stations near Cristianshavn, only the Metro which has restricted bicycle access. However the Harbour Bus (Havnebus) allows cycles on and the stops at Knippelsbro, Operaen, Holmen Nord and Refshaleøen give access to this route at various points.

Note: The map (above) and photographs can be enlarged by clicking on them (opens in a new browser tab). On the map north is 48° clockwise, i.e. at 01:36 on an old school analogue clock.

Head north-east along Vesterbrogade, passing Tivoli and cross the broad H.C.Andersens Boulevard. (GPS 55.67586 12.56805). Go around the town hall square (Rådhusplads) in a clockwise direction to gain the quieter street of Vestervoldgade. Head south-east along this until you reach the harbourside. The sights along this stretch are covered in the first tour in this series - The City.

1 Ahead of you is the new cycle bridge (Lille Langebro) which provides a pleasant alternative to the road traffic bridge (Langebro) and is part of the green-wave system whereby commuters cycling at 20 km/h get green lights at all the traffic lights during the morning and evening commutes. The view from the bridge is impressive with some of the most important new buildings standing out, BLOX immediately to your left and The Royal Library (The Black Diamond) beyond. And in the distance the Opera House with its roof jutting out like an immense diving board.

On the other side of the bridge continue straight along Langebrogade, (GPS 55.67074 12.58148) passing The Danske Sukkerfabrikker (Sugar Factory - now the headquarters of the Nordic Sugar Company). To the right the defensive ramparts loom above you.

2 At the second turning on the left the main Chritianshavn Canal comes into view. If you wish to explore the defensive fortifications then this is a good opportunity to park up and climb up onto the ramparts. (GPS 55.67021 12.58743).

The cycle route continues along the right hand side of Christianhavn Canal along Overgaden over Vandet. At traffic lights by Christianhavns Metro station continue straight across then 2nd right onto Sankt Anne Gade. (GPS 55.67333 12.59258).

3 The sudden majesty of Our Saviour's Church (Vor Frelsers Kirke), with its outrageous spire, confronts you. Consecrated in 1696 it is a jewel of Palladian-Netherlandic style - the interior is light and spacious. The tower and spire can be accessed for the outside (fee). Wooden ladder-stairs within the tower lead up to the bell tower. A door leads onto a viewing platform, and from there the spiral stairs can be climbed - the views are exceptional (perhaps the best high viewpoint in Copenhagen) but as height is gained the stairs become narrower and narrower and vertigo starts to rule.

4 Our journey continues left along Prinsessegade past the entrances to the independent kommune of Christiania, renowned for its alternative lifestyle. It contains a mixture of homemade houses, workshops, music venues and eateries. It is also renowned for its cannabis culture.

After a slight S-bend turn right into Refshalevej, (GPS 55.67543 12.59981) and stay on this as it bears round to the left. The road marks the western boundary of Christiania. On the right are the bastions of the old defences of Copenhagen, clearly demarked on the map by the crimped edges of the main moat.

The track rejoins a main road (actually a continuation of Refshalevej) near the end of the lake (Tømmergraven) on the left. (GPS 55.68337 12.61011). This is still called Refshalevej. Immediately on your right is the new location of the world famous Noma restaurant, voted on several occasions the best restaruant in the world.

5 At the T-junction turn right onto Forlandet (GPS 55.68475 12.61304) and continue past the entrance to some blocks of flats to the next junction on the left (Vindmøllevej). (GPS 55.68147 12.61495). Take this road towards Amager Bakke, otherwise known as Copenhill. This is a combined heat and power waste-to-energy plant. You may wonder why this tour is taking in a power station, admittedly quite attractive as power stations go - well Copenhill is not just a power station - included in the build is a ski-slope, an uphill running track and an 85m high climbing wall.

Having taken in the sights of Copenhill return the way you came to the junction of Forlandet and Refshalevej. (GPS 55.68475 12.61304). Now continue straight on (Refshalevej) passing flats on the right and a lake on the left (Minebådsgraven). Cross a cobbled section of road, where the buses terminate, and turn right at the next junction, this road is still called Rafshalevej. (GPS 55.69008 12.61202).

6 Follow the road, past the marina, as it turns north, to the huge drydock on the left. This is a relic from the massive shipbuilding yard that we will be passing more of in a while. When the road bends left again take the next junction on the right (still Refshalevej), (GPS 55.69255 12.62385) and continue to where the land meets the sea. This is the Øresund and is the main shipping lane between Denmark and Sweden. Continue left along the seawall to the very end of the road. (GPS 55.69749 12.61197). Ahead is the Trekroner fort protecting the entrance to Copenhagen harbour. However there might not be a sea view here for much longer as there are plans to build a massive new island (Lynetteholmen) with housing for 35,000 people.

Our tracks have to be retraced a little as there is no way ahead. At the T-junction where an earth bank with trees lies ahead, turn right (still Refhalevej). (GPS 55.69255 12.62385). Passing the works on the right the road snakes right and left and you come to another T-junction. Turn left then immediately go through a narrow gateway/doorway on the left. (GPS 55.69467 12.61402). This leads to a wide road between the huge sheds of the former shipbuilding works.

7 These former shipbuilding sheds of Burmeister and Wain (B&W) have now be re-puposed for other uses. The shed on the left contains the Copenhagen Contemporary Art Gallery. And the buildings on the right contain the largest climbing centre in Scandinavia (Blocs and Walls). Behind Blocs and Walls is the very popular street food market (Reffen), constructed out of old shipping containers. When you have finished exploring this reclaimed industrial area continue along the road between the sheds and so out to the main road where the bus terminus lies. Continue straight along this road until it bends to the left and take the route through the gateway on the right (Krudtløbsvej). (GPS 55.68718 12.61100). Swing left at the water's edge and follow the canal past houseboats to the junction with the main road (Kongebrovej). Turn right and after 100m, where the road bends left, turn right through the gates into Nyholm. (GPS 55.68404 12.60720).

8 Nyholm is still a military area but the public are allowed access between 8am and sunset. Follow the road round to the right and continue along Spanteloftvej northwards with the old ehllow coloured barracks on your right. Where the road widens head to the end where artillery guns point out to sea. Facing the city is the retired frigate FDMS Peder Skram which is now a museum ship. Behind the Peder Skram is a building housing a wooden crane - this is the Masting Sheer built to install masts into the largest ships. Beyond this building another retired naval vessel, the submarine HDMS Sælen, sits high above the water on supports. There is also the possibility that you may see the Royal Yacht Dannebrog tied up along side the pier, if it is not out at sea. Follow the road (Henrik Spans Vej) back to the entrance to Nyholm. A couple of figureheads from old vessels can be seen along the way.

9 After exiting Nyholm continue along Danneskiold-Samsøes Alle for a short way and after the first major building on the right turn right onto Fabrikmestervej. (GPS 55.68248 12.60572). Continue straight ahead crossing the bridge and into the large car-park. Skirt round this to the waterfront and continue under the canopy of the imposing Opera House. The Opera House occupies a special place being aligned on the axis from the Marble Church, through Amalienborg and across the harbour. Three elements of The Opera House stand out, the immense unsupported roof, the glass curtain wall and the orange, maple, "pumpkin" kernel containing the auditorium.

Building work for a new park and car park now blocks the southern access to the Opera island, so circle around the Opera and return to the northen bridge by the old harbour cranes. Immediately after the bridge turn right along the canalside. Continue across a foot/cycle bridge (Proviantbroen) to reach the three-pronged foot/cycle bridge (Trangravsbroen). Take the right hand fork towards the City and then take the first road on the left (Strandgade), with "The Corner" coffee and wine bar on the corner. (GPS 55.67783 12.59788). Stay on Strandgade bending right and left to cross the Wilders Canal with Christianshavn's colurful Færgecafe on the corner. Strandgade is a delightful street full of old warehouses and elegant houses. The famous Danish painter Vilhelm Hammershøi lived here (at numbers 25 and 30) where he painted many of his enigmatic interiors.

10 Straight ahead lies the impressive Christian's Church. Cross the busy Torvegade and continue to the gates of the church. If the church is open it is worth a look inside for its unusual galleried boxes that give the impression of a theatre.

Follow the road (right and left) around the church and continue straight along Nikolai Eigtveds Gade (between buildings) to the edge of Christianshavn Canal. (GPS 55.67194 12.58528). To the right is "The Circle Bridge" and beyond "The Black Diamond". Cross the Circle Bridge (Cirkelbroen) - another adventurous swing-bridge designed by the artist Olafur Eliasson - and continue along the harbour front to where we originally crossed the harbour at Lille Langebro. (GPS 55.67074 12.58148). Retrace your steps back across the harbour to return to the Central Station.

Some history of islands:

In 1625 when Christianshavn was first developed only a small area either side of Torvegade was actually above water. In 1685 the ramparts were built out, but they mostly enclosed the watery harbour. Nyholm was the first new land to be created - this was done by filling scrapped ships with stones and sinking them. Slowly the areas between were filled in with new islands, Christiansholm, Arsenaløen, Dokøen, Frederiskholm.

Beyond the ramparts lay some shallow sands called Refshalen. In the 1870's dredgings from the harbour's waterways were used to build up the island (Refshaleøen) and Burmeister and Wain created their shipyard there.