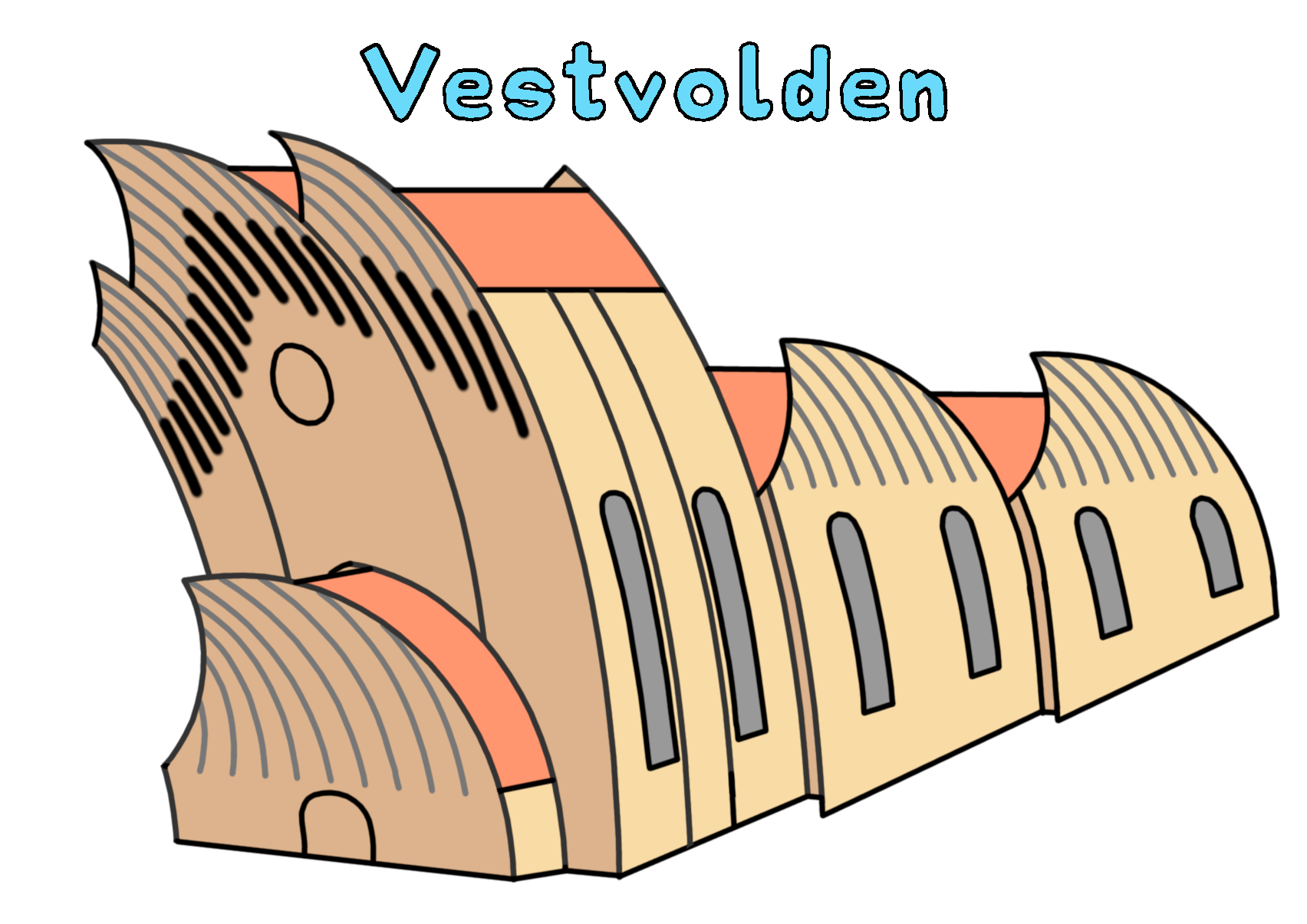 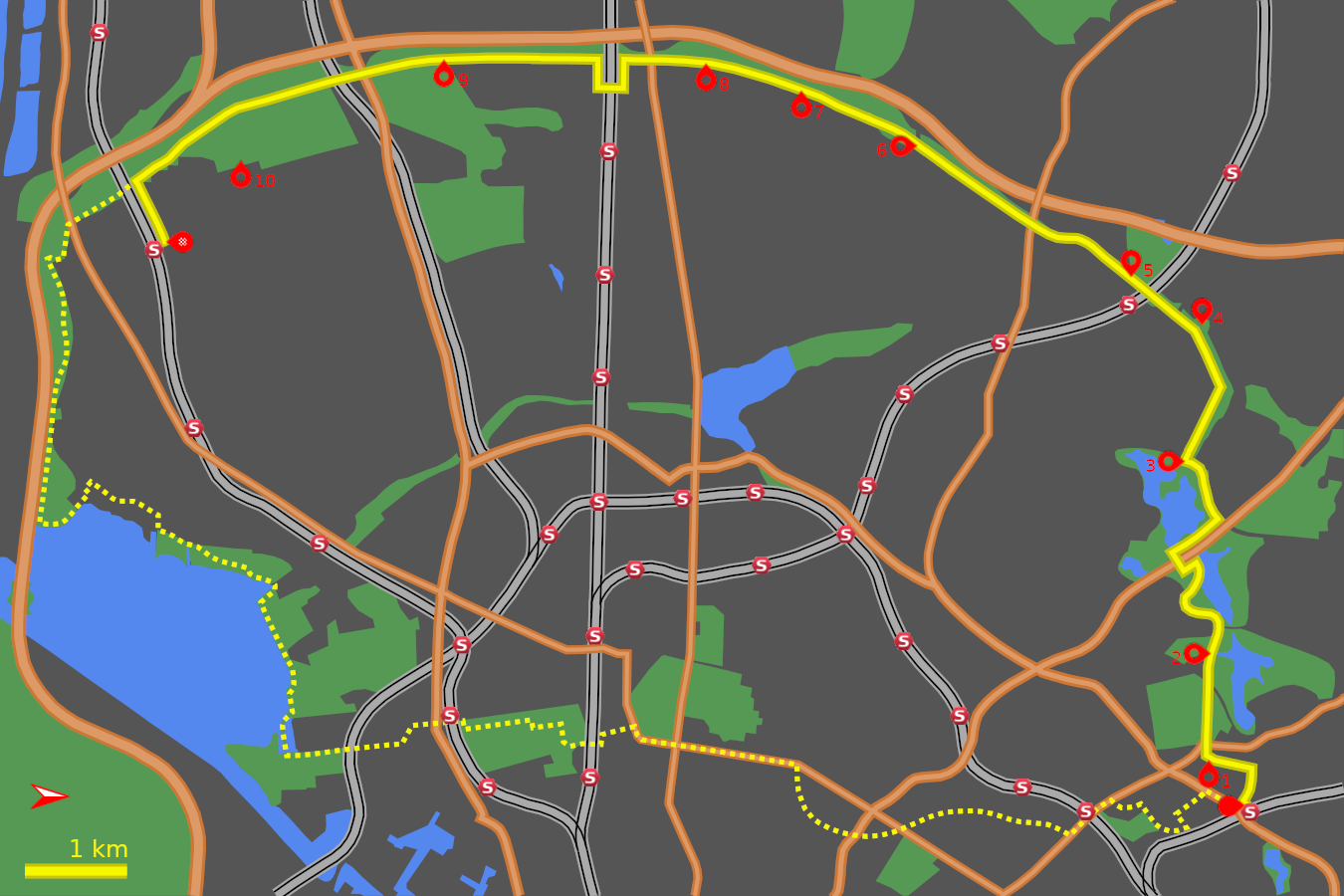 The Copenhagen Fortifications grew out of the desire to defend the country and its capital following the disastrous defeat to Prussian forces in the Second Schleswig War in 1864.

The fortifications were built up steadily in the late nineteenth century. However by the time of the 1st World War advances in artillery range and power had made this fixed defensive line obsolete, and a more flexible line was established across the neck of land between Roskilde and Køge.

The following tour blends the lakes and marshes at Utterslev with the 14 km long dedicated cycle track following the defensive ramparts to Avedøre.

Looking at the overview map of the cycle tours on the Introduction page shows an obvious tour (40 km) of the western outskirts of Copenhagen by combining tours 6, 10 and 9 (with a short cut utilising tour 4). This has the added attraction of being almost wholly off-road - meaning on dedicated cycle paths. It is probably easier to navigate in the anti-clockwise direction which means route 9 has to be reversed as described. The map above shows this possibility as a dotted line.

We will start at Emdrup Station (S-train B line) where Tuborgvej crosses the railway line. (GPS 55.72005 12.54155). Trains from Copenhagen stop at the eastern platform. Take the ramp up to the footbridge over the railway. On the right are the brick residences of Haandværkehaven (Craftsmens garden) on Banebrinken.

1 Grundtvig's Church was discussed in chapter 6 of these tours which ended at Emdrup Station. But it is never a chore to revisit this remarkable building. Circle round the church and leave by the road (På Bjerget) heading west opposite the immense church facade. Go straight across the main road (Frederiksborgvej) to the gated entrance of Bispebjerg Cemetery.

The domed building to the left was once the chapel for the cemetery but now functions as studios for urban and modern dance. Go through the cemetery gates and head straight down the avenue of poplar trees. The main bulk of the cemetery is to the left, and in spring people come from far and wide to see the cherry blossoms.

2 The Utterslev Marshes comprise three lakes with large reed beds. They are an important bird reserve and the first extensive nature area you meet north of the City. The eastern lake is on your right behind the trees. As you curve round Mosesvinget an arm of the lake comes to meet the road.

Shortly after you come to a cross roads with Horsebakken. Go straight over to continue on Mosesvinget. The road curves left then right around the middle lake. After the right-hand bend a cycle track and footpath appear on the right going into trees (GPS 55.71479 12.50834). Take this track which follows the edge of the lake. After 200 m an opening in the trees on the right leads out onto a wooden platform with fine views over the lake.

This track eventually meets the Hillerød motorway head on, and to avoid it take the narrow track on the left that rises slightly, 50 m before the motorway. After 150 m the track curves right and disappears under the motorway via some steps (GPS 55.71453 12.50351).

When you emerge again into the light, on the other side of the tunnel, turn right and take the track which runs north-west, parallel to the motorway. The western lake is on your left. After 600 m another road subway appears. Turn left just before this concrete subway on an unsignposted track (GPS 55.71776 12.49700).

Continue on this track to where it curves left. On the right some brick three-storey flats appear across the road (Åkandevej). The track runs next to the road for 100 m. At the pedestrian crossing (signposted route 9) cross the road to the far side (GPS 55.71474 12.48716).

3 This is the point at which the Vestvolden rampart and moat defences meets the "Oversvømmelser" flood defences that run from the Utterslev Marshes to the coast at Klampenborg.

The cycle track along the western defences runs on the "defensive" side of the fortifications. From this "friendly" side rises a 10 m high rampart and on the far side of this is a moat/canal running the whole length of the defences. At 600 m intervals concrete fortifications (called kaponiere) jut out from the rampart into the moat to provide artillery cover down the length of the moat. The kaponiere are numbered from south to north using roman numerals (I - XXIII).

At various points along the defences modern structures, roads and railways, cut across the rampart and enable the profile to be investigated. This can be seen on the western side of Åkandevej where the rampart begins, although in summer bushes and trees make it harder to see the whole.

So let's get going. The first stretch has little to note, but after 700 m the track makes a significant turn to the left and on the right is a large children's adventure playground. This is built into the rampart at kaponiere XXII (GPS 55.71748 12.47642).

Further along there are clearly seen underground stores built into the rampart. These were mostly used as ammunition magazines for the batteries. A road is crossed (Mørkhøjvej) at a pedestrian crossing and soon after the track turns left again at kaponiere XXI (GPS 55.71541 12.46789).

4 Here a narrow tunnel leads through the rampart out to the double kaponiere defending the bend in the moat. The tree-lined canal exudes an air of peace and tranquility, but in its original form the earth was stipped bare to prevent giving the enemy cover.

A larger road is soon crossed (Frederikssundsvej) at a pedestrian crossing. A further 300 m on the track forks (GPS 55.71168 12.46329), take the right hand branch which takes you up over the S-train track (C line) close to Husum Station.

5 The track runs along the top of the rampart for a short while until a fork left takes you back down to the south-east side of the rampart.

An open grassy area follows and then a crossing of a minor road (Islevholm). After 200 m more the track runs alongside a busy road (Tårnvej) (GPS 55.70651 12.45491), At the next junction with Islevbrovej the cycle track separates slightly from the road, running along the crest of a slight embankment. The next major intersection is with Slotsherrensvej, and this is best crossed at the traffic lights (GPS 55.70147 12.45162).

Rejoin the cycle track running beneath the trees. A fairly straight run of a little over 1 km brings you to the next major obstacle at Jyllingevej.

6 The route straight ahead is blocked by road works and the grounds of the Vestvolden Experience Center. The official diversion is to head west for 200 m to a traffic light crossing close to the motorway (GPS 55.69175 12.43697). Take the cycle track on the far side heading south. Follow this for 500 m to where a track branches off left. Take this track, crossing the moat, to rejoin the Vestvolden cycleway just south of the experience center. The Vestvolden Experience Center has bunkers and magazines to visit and exhibitions on various aspects of military history.

7 Continue south for 1 km to where the battery railway exhibit is located. (GPS 55.68167 12.43120). The battery railway ran along the east side of the rampart to supply supplies and materials to the defensive installations. A further 300 m south is the reconstructed Artillery Magazine with displays and information. A bit further on is the well maintained Hvissinge battery.

8 South again is the double kaponiere XII which can be accessed through a large tunnel called a Poterne - this was high enough for a mounted soldier to pass through. Just before the next major road junction (Roskildevej) a branch leads off left taking you over the road (GPS 55.66991 12.42626).

A little further on another obstacle appears in the shape of the main railway line to Roskilde. There is no direct way across, so turn left (east) for 250 m to where a subway ducks under the railway. (GPS 55.66524 12.43027). On the far side turn right and retrace the 250 m to where the cycle track resumes (Voldgade).

The next stretch has a good collection of the different styles of defensive installation to keep an eye out for. The next road (Park Allé) is crossed at a pedestrian crossing (GPS 55.65394 12.42567).

9 A little further south the vast Brøndby forest appears on the left. This stretch ends where a bridge carries the track over the Holbæk motorway. Shortly after the track forks - take the right hand track which takes you over the high-speed railway (GPS 55.64295 12.42898).

10 The track now borders open farm fields on the left. A road on the left (Avedøre Tværvej) meets the track (GPS 55.62948 12.43748). One of Thomas Dambo's forgotten giants (Hilltop Trine) can be found a little way off this track in the grounds of the Quark Nature Centre.

The vast Avedøre estate comes into view on the left, but there are still a few defensive structures left to see before we leave the track. Just before the track vaults over the S-train railway line (A) a junction on the left is signposted to Avedøre station (GPS 55.62347 12.44531),

Take the train from here back to central Copenhagen (S-train A line).

The last section of the western defences from Avedøre south to the old coast line where Pluto now lies was covered in the previous chapter "Valby to Pluto".

There is a very useful online resource for the history of the defences called vestvolden.info. On there you can see the descriptions and photographs of the various defensive installations.

Perhaps more remarkable than the 15 km of western defensive ramparts and forts was the plan to flood the entire northern zone from Utterslev Marsh to the coast at Klampenborg using water drained from the vast Fure Lake 5 km to the north-west. It was calculated that it would take 8 days to flood the designated area.

Hover over (or touch) the map below to show the extend of the flooding. 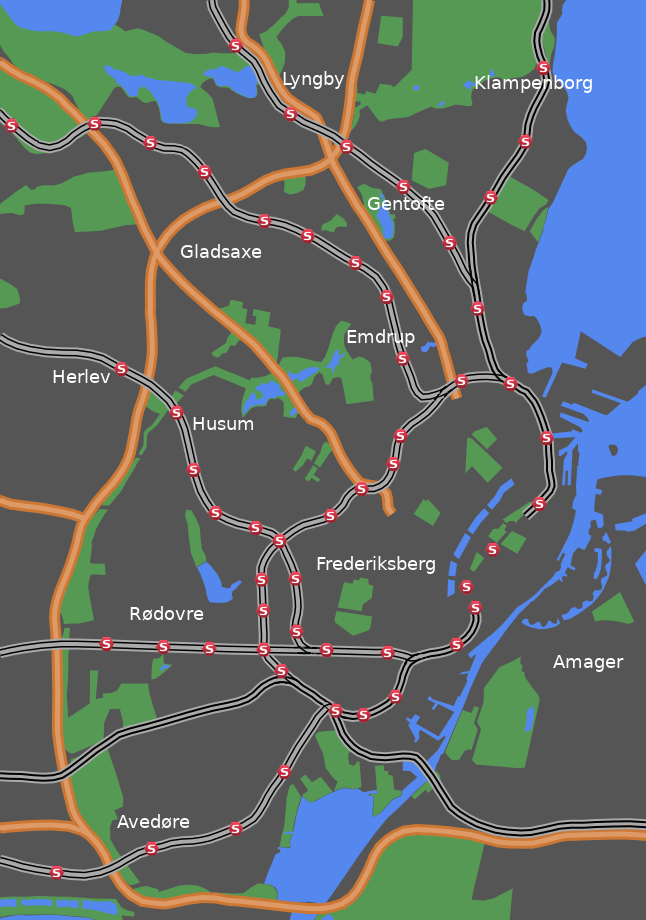 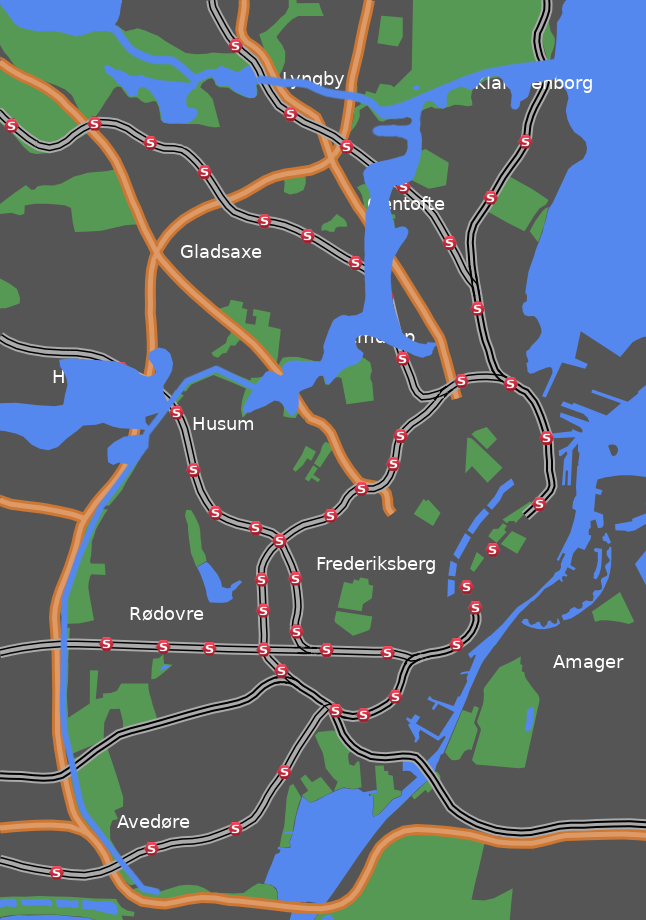